A sure sign that you have a food-related blog (even if you're less than regular about your posting), is that you chronicle meals and meal-making, in the event that it turns out to be blog-worthy. I believe the empanadas that I made today for my book club are indeed blog worthy.

That being said ... I've been so good about transcribing amounts and directions for our guest blog series, I bet you thought it would translate into my own posts. Think again.

The evolution of the Book Club Empanada:

Time: not a lot of time for prep or even shopping (a couple of hours in the morning, then home in time to toss something in the oven), so a look to the larder and off we go:

Ingredients (what I had on hand):

Pizza dough would not be my first choice for an empanada shell, as after I thawed it, it did a very nice rise as it wants to do, but for my empanadas I needed it to be beaten into submission to make it thin enough, which will result in a slightly tougher dough when cooked. But if you get it thin enough, it's still quite tasty. You can try this empanada dough recipe if you want (I have a similar with a mix of whole wheat and unbleached flours).

To aid me in thinning out the dough, I called upon my trusty pasta machine, and added a mix of whole wheat flour and corn meal when kneading it and folding it between presses (for you pasta machine enthusiasts: several passes at #1, then once through #2, then finish rolling it out with a rolling pin).

Last night my roommate made a wonderful meat marinara for some pasta, nicely simmered and with a slight chipotle kick. Knowing I had sweet potatoes and chick peas on hand, that combo came first to mind. Finding the pizza dough settled me onto the empanadas, although, wouldn't that have made an equally interesting pizza?

Since everything was already cooked/leftover/canned, a stovetop simmer was in order to try and meld some flavors. So everything went into a pot, along with some cumin, curry powder, turmeric, and ... well I'm not entirely sure, but I think there was something else. :) The flavors were coming together nicely, and I decided a nice grate of pecorino romano on top of the filling before closing the empanada would add the extra 'something' needed.

While the flavors on the stove were mingling, I set to pounding out the dough. Once through the pasta machine and evened out under a rolling pin, it was time to cut my rounds. I knew the size I wanted, so I found a bowl that fit the bill and cut up my rounds.

Approximately 3 TBSP of the filling went into the center of each round, which had an egg wash lightly brushed around the edges. Fold over the top of the round, and compress the edges to seal, then follow with your favorite pie crust pinching technique (don't be jealous of my skills! ;)

So that was my morning, but book club wasn't coming till 4pm. So I packed the empanadas (after making some light slits across the tops) in a bin, making sure to keep them separate and between layers of parchment paper, so I might put them in the freezer. As I turned to grab the cover of the freezer bin, I saw the unused pecorino romano. Plan B: before putting them in the oven, egg wash the empanadas and grate the cheese on top. Onward...

I got home at 3:30, turned the oven to 400 to preheat while I put the empanadas on a parchment-lined baking sheet, egg-washed them and grated the pecorino on top of each. They baked about 18-20 minutes. The tops just started to brown, and the bottoms were nicely golden. They rested on a baking rack while I greeted my guests. 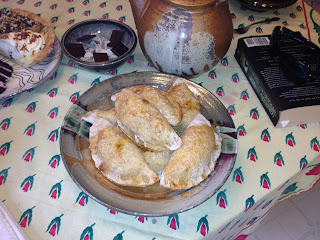 We had a lightly gingered iced-yerba mate with almond milk, and I had some lovely candied ginger and a bar of chocolate from French Broad Chocolates for a sweet follow up. But I'm sure you spy a bit more in the top left corner... 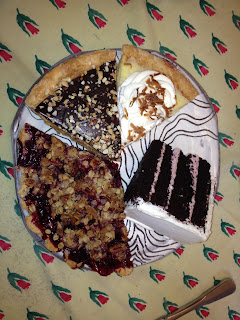 a shmata of sweets

The lovely and talented Deanna brought a generous hunk of her fresh berry pie (the berries, we learned, were hand picked by herself on a mountain hike) that was divine. The equally lovely and talented Lisa brought an array of offerings from City Bakery that satisfied just about every sweet tooth craving.

We learned early in our book club that it took all of three minutes to determine how far we each had read since our last meeting, and another three minutes to discuss the common areas of the book. So it's always been more about the getting together, which in addition to the reading is why I look forward to it every time. Reading is fundamental ... to good friends and good eating at book club!