Ah, the best laid plans ... our seasonal guest series has been subjected to schedule anomalies, but we're rewarded on the re-start by a most lovely day with the most lovely Rosetta! 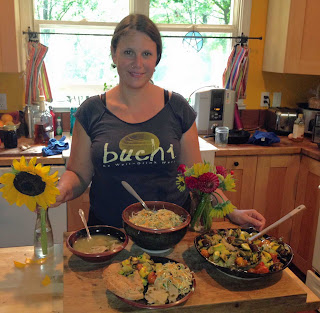 Rosetta, with a bounty of the season

A little about our guest chef o' the day: Rosetta is the chief-everything (with her husband Jack, of Jack's Boxes) of Starshine Industries, and to paraphrase her own words, she 'helps guide a restaurant to greatness, manifests retail health food deliciousness, raises food from the magic of the earth, and children from her own heart and spirit, and she knits together people to create beautiful nets to catch a functional future."

The restaurant is Rosetta's Kitchen, Asheville's Whole-Food Kitchen-Cafe, where she's been 'feeding the family right' since 2002, serving the extended family, friends, and wander-throughers creative vegetarian and vegan soul foods. And that's not all by a long-shot. She has (also paraphrasing her own words) "swum in the Ganges, and didn't die...bore four children at home (two unassisted), drove all the way from Nicaragua to Asheville alone with four kids, have managed to keep the doors of a small business open post-2008 crash, scored the best husband on the planet, and can get birds to fly our of a tree to land on me". 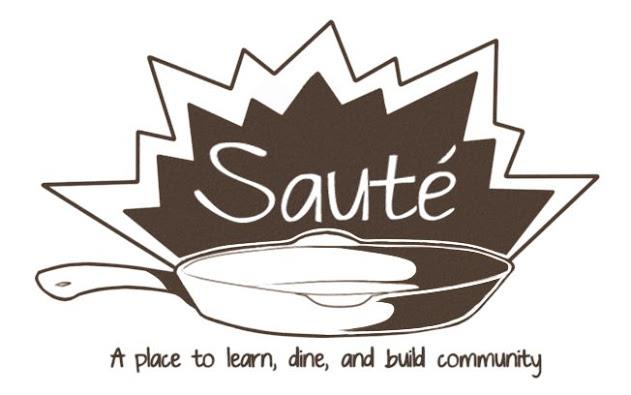 And in addition to Rosetta's Kitchen, she has opened a second location, Rosetta's Kitchenette, at UNC Asheville, has launched Starshine Foods, instituted the "Everyone Eats" Plate, sat on the board of the Asheville-Buncombe Food Policy Council, and is on the organizing board for the creation of Sauté  A Community Cafe. And there's more - we could (and someone should) write a book on just what her life has been thus far, but I'm happier to be in a living chapter with her in the here and now, and share just a little of the love that flows from her as naturally as the sun rises each morning.

Now to our day... First I had to pack up the pots we would use. I knew we'd have a variety of seasonal colors, so I chose pieces from my "starry night" line of glazes to showcase them in their natural glory: 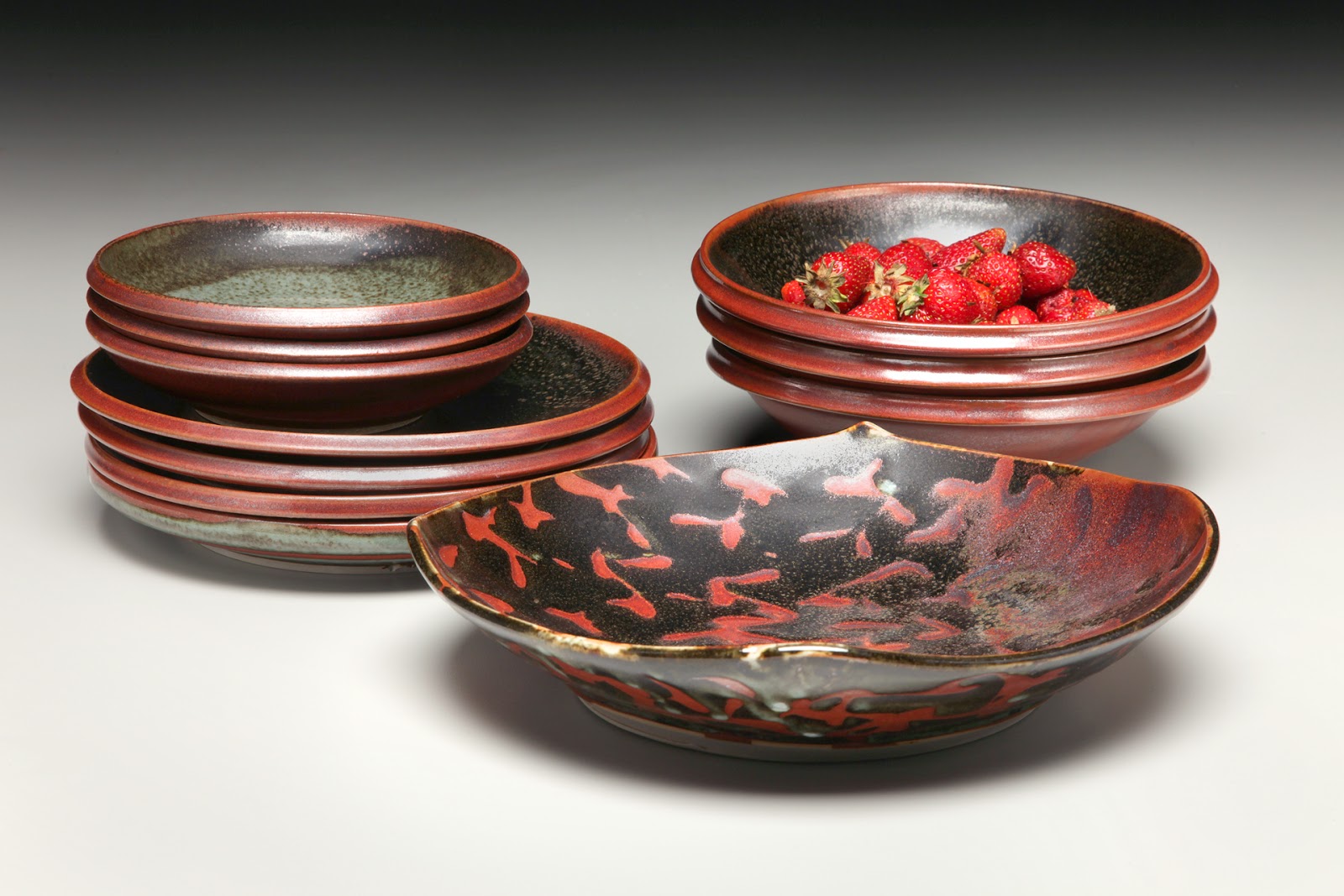 Rosetta's only stipulation on our day was that the kids be able to come, and with her beautiful children (and sometimes some extras!) that's always a bonus. So we packed into her car and headed out on our adventure! 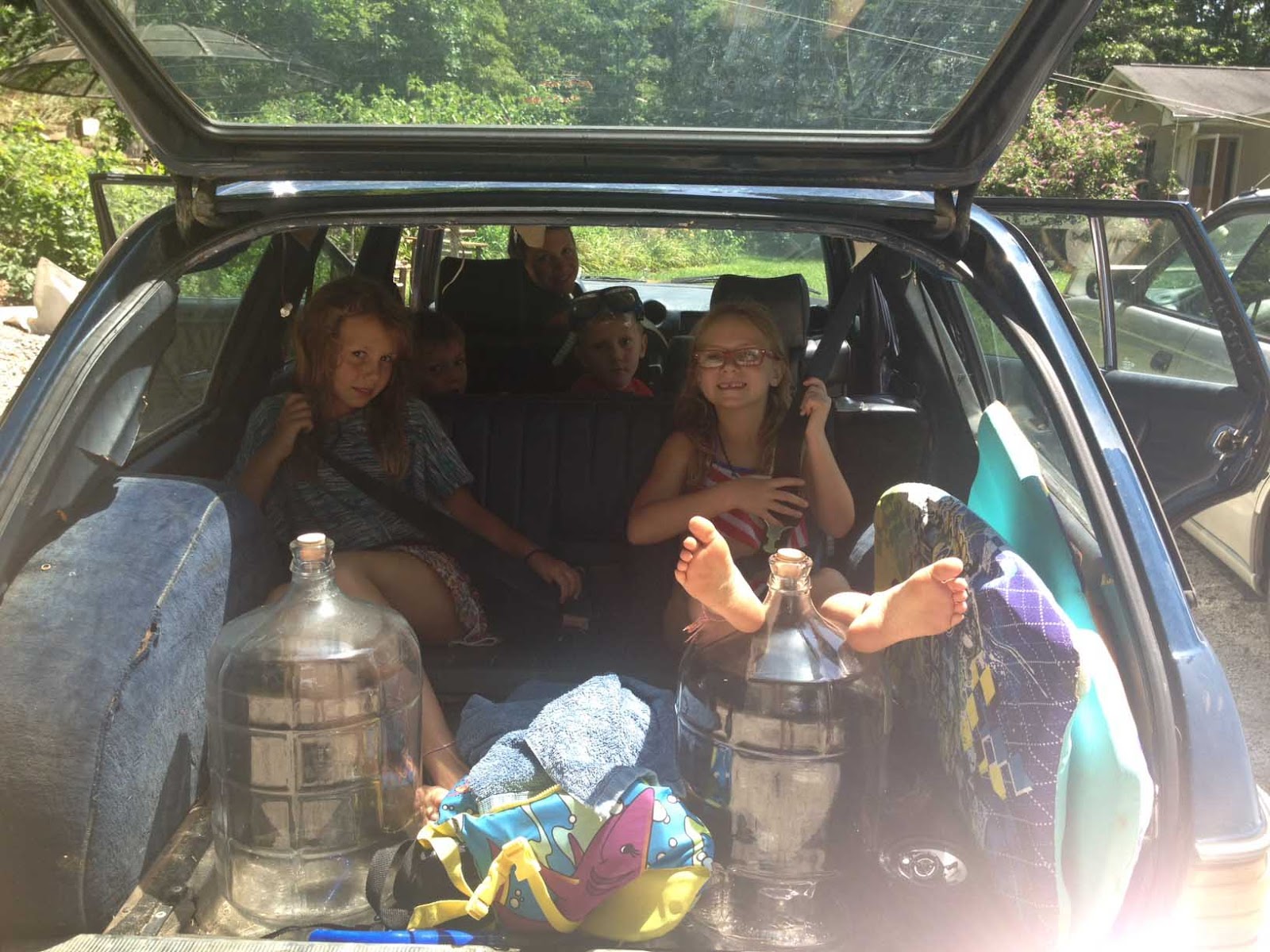 loaded up and ready to go!

... stopping briefly to help a box turtle on its own journey... 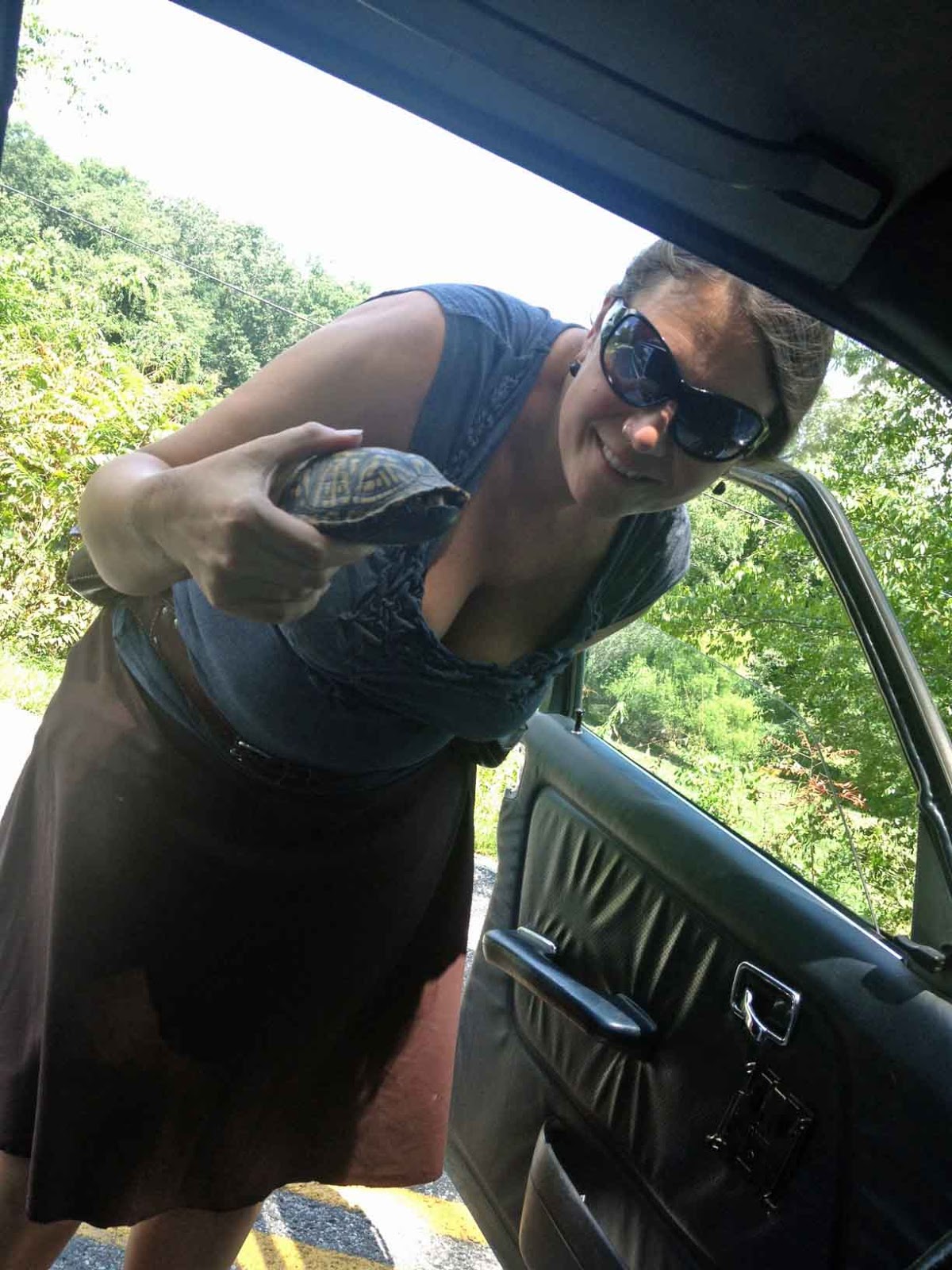 With turtle in tow, we were off to the farmstand at Flying Cloud Farm, managed by Annie & Isaiah Perkinson. Rosetta and Annie first met when both were students at Warren Wilson College, where they started the campus vegetable co-op that continues today. Both continue to feed the masses individually too - Flying Cloud Farm, located in Fairview, NC, produces fruits, vegetables, and flowers for local markets and sells directly via their CSA, local tailgates, and at their self-serve roadside stand. 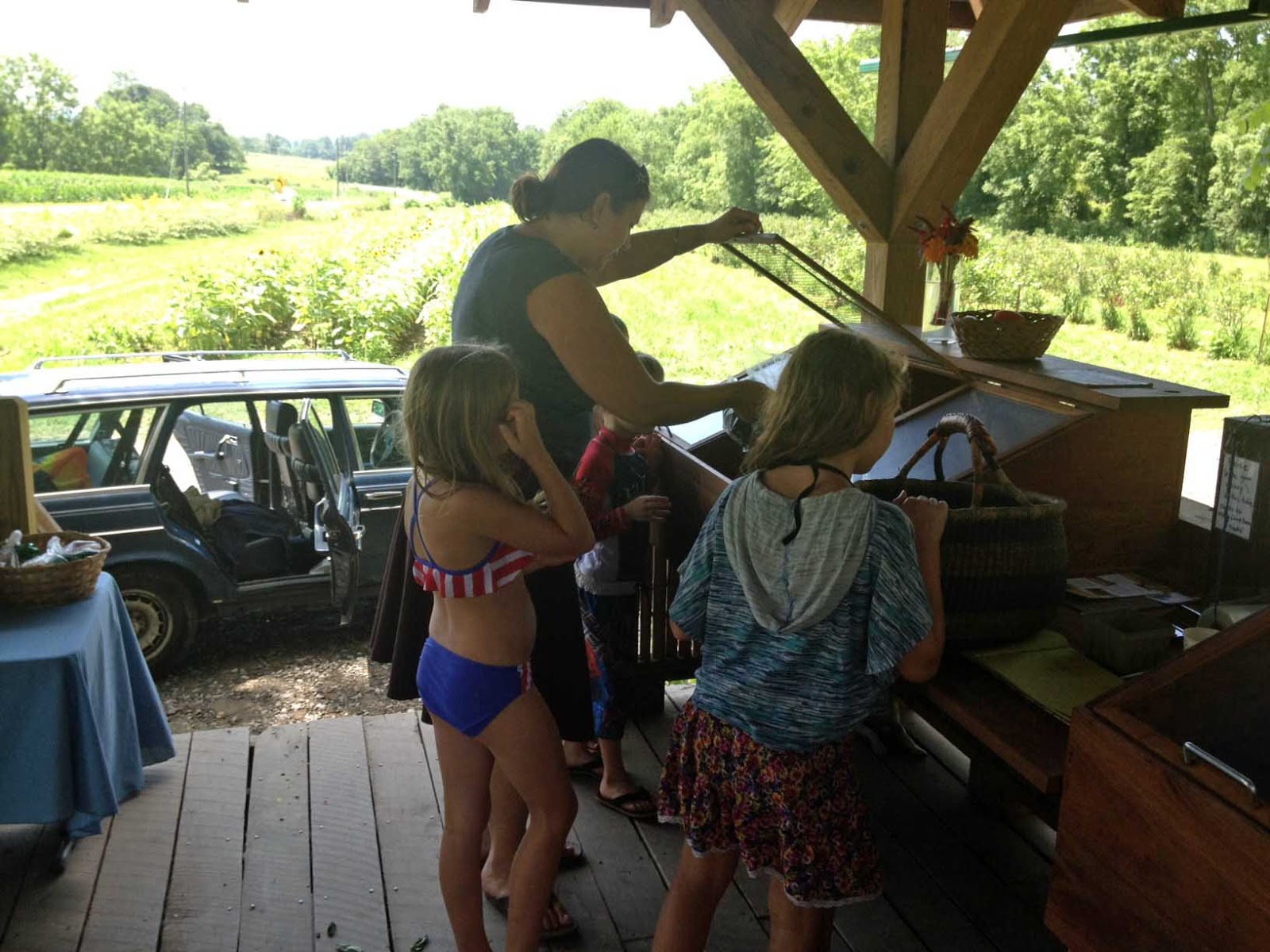 perusing the many offerings 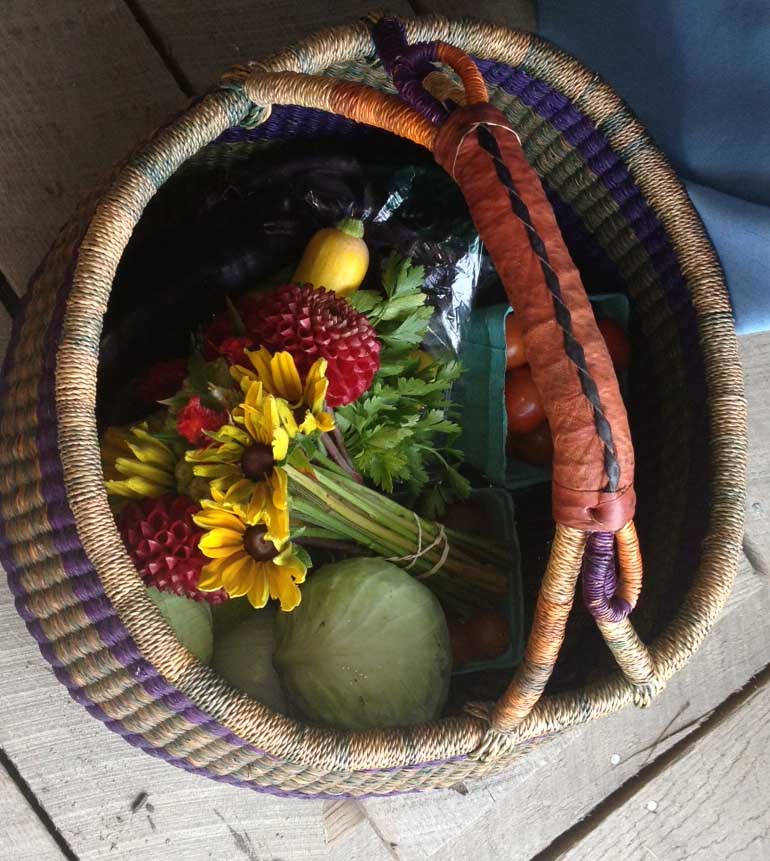 our basket of farm goodness

Basket and water bottles filled, the day was too gorgeous to skip the chance to stop off for a quick swim and admire the creative diving styles of the kids. Then it was off to the kitchen to cook!

First the Ratatouille. The 'ish' is added because it's a variation (glad I'm not the only one who loves those!), and because, as Rosetta points out, "everything I know about Ratatouille I learned from a cartoon rat." Recommendation enough for me to put it on the rental list! But also a good reminder to let recipes be guides and inspirations (ok, maybe not all baking recipes...), and when the bounty of the season is all around, don't let them be restrictions. I was also very happy to find that, like me, Rosetta's recipes are filled with 'a dash', 'a shake', 'a handful' and other measurements that may make some cooks nervous, but we hope you will embrace it. 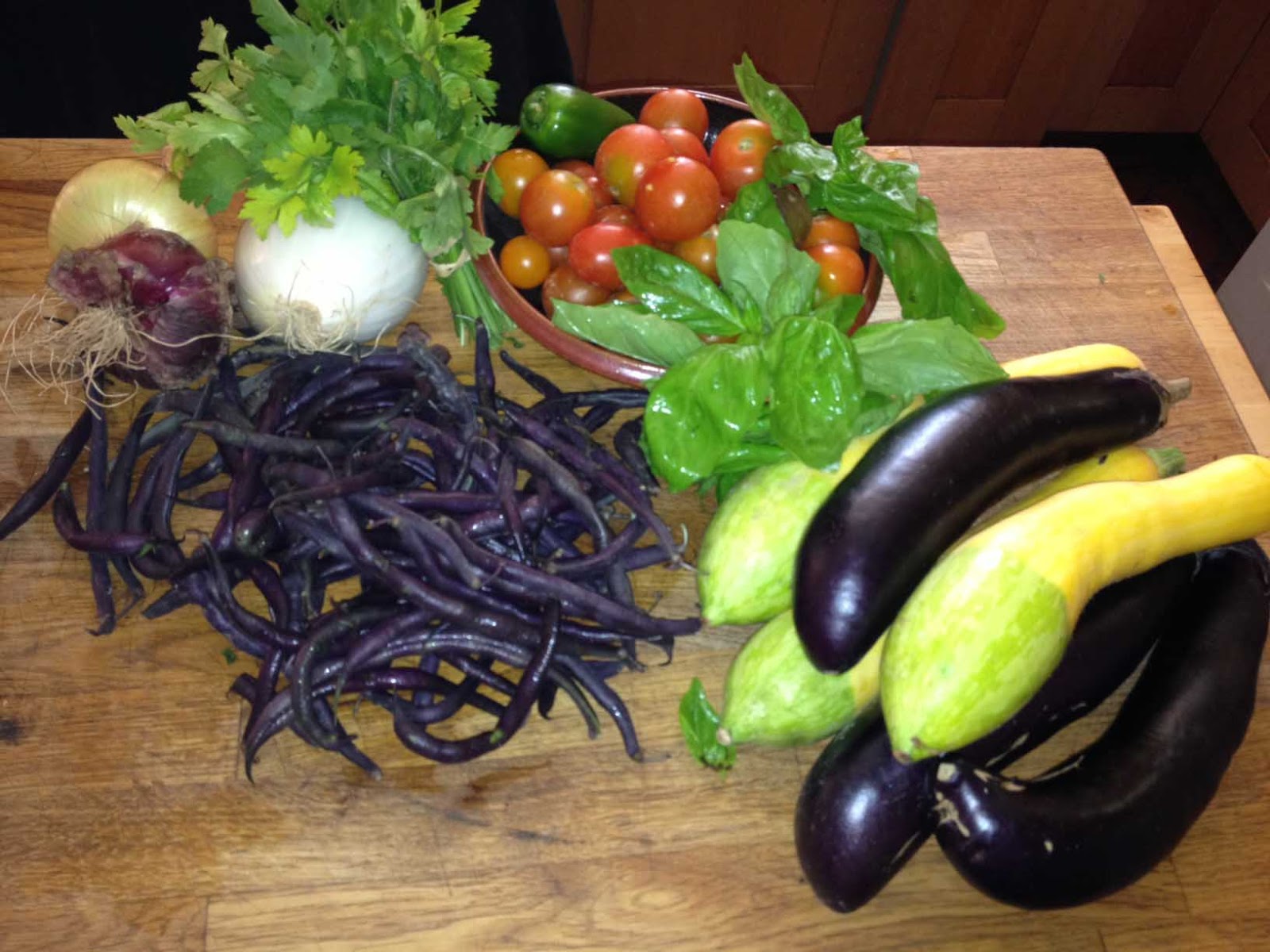 A note on the size of the cuts: the goal is to have a nice forkful, so not too small.

*all the veg came from Flying Cloud Farm, but for the jalapeno, which came via Rosetta's sister Juniper Odell who grew it at the Wezeltown Terraced Gardens.

Wash the tomatoes, then toss them into a heavy pan. Toss with olive oil, pepper, and dry thyme. Roast in the oven until they’re fragrant and nicely roasted. 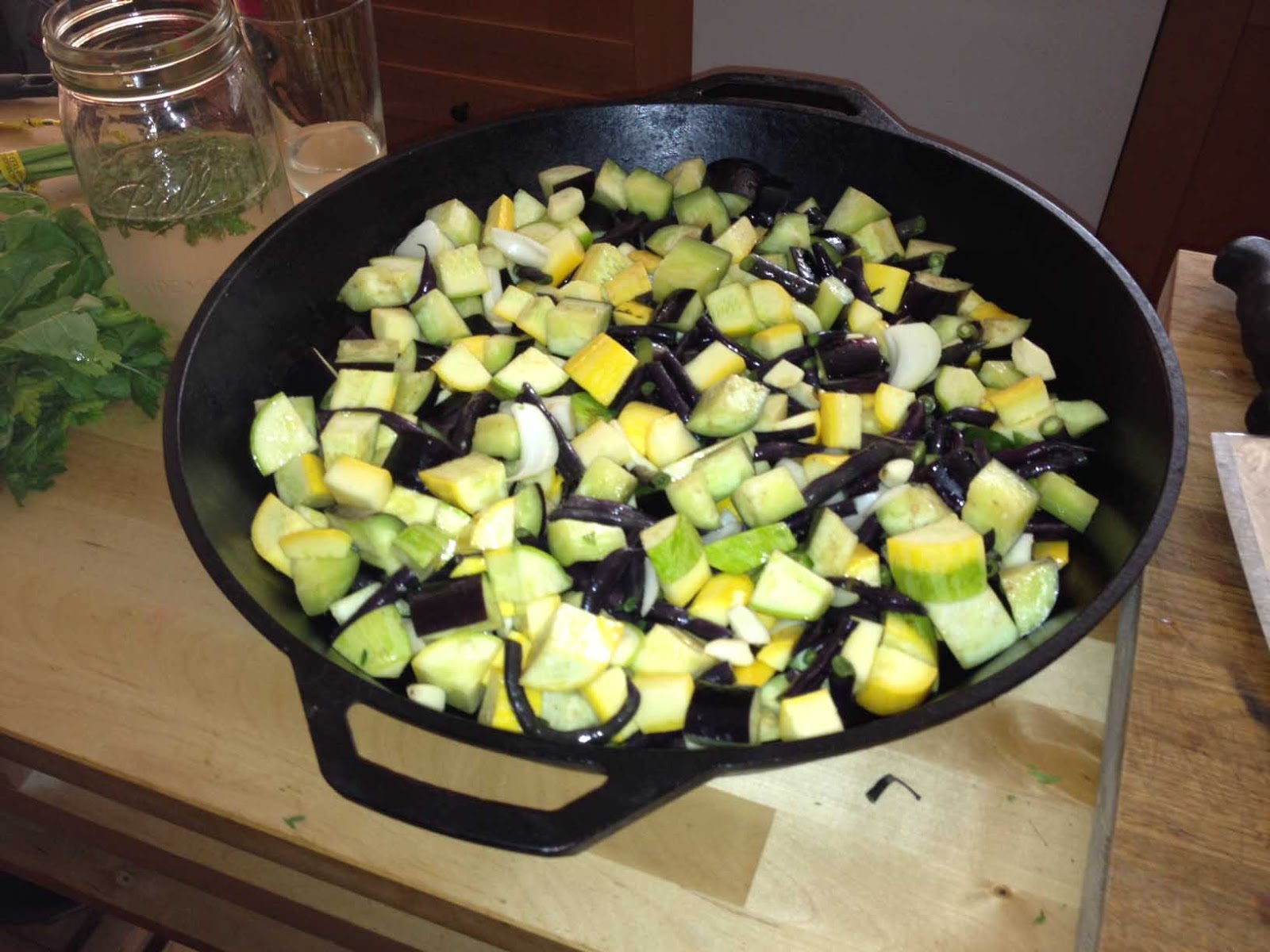 As  you prepare each of the rest of the vegetables, toss them into a large bowl (all but the basil and parsley). Toss with olive oil and salt, then transfer to a heavy pan and roast until the veg has roasted edges (do not stir), and eggplant is tender.

Remove from the oven, add tomatoes, parsley, and basil and toss. Taste for seasoning and salt as needed. 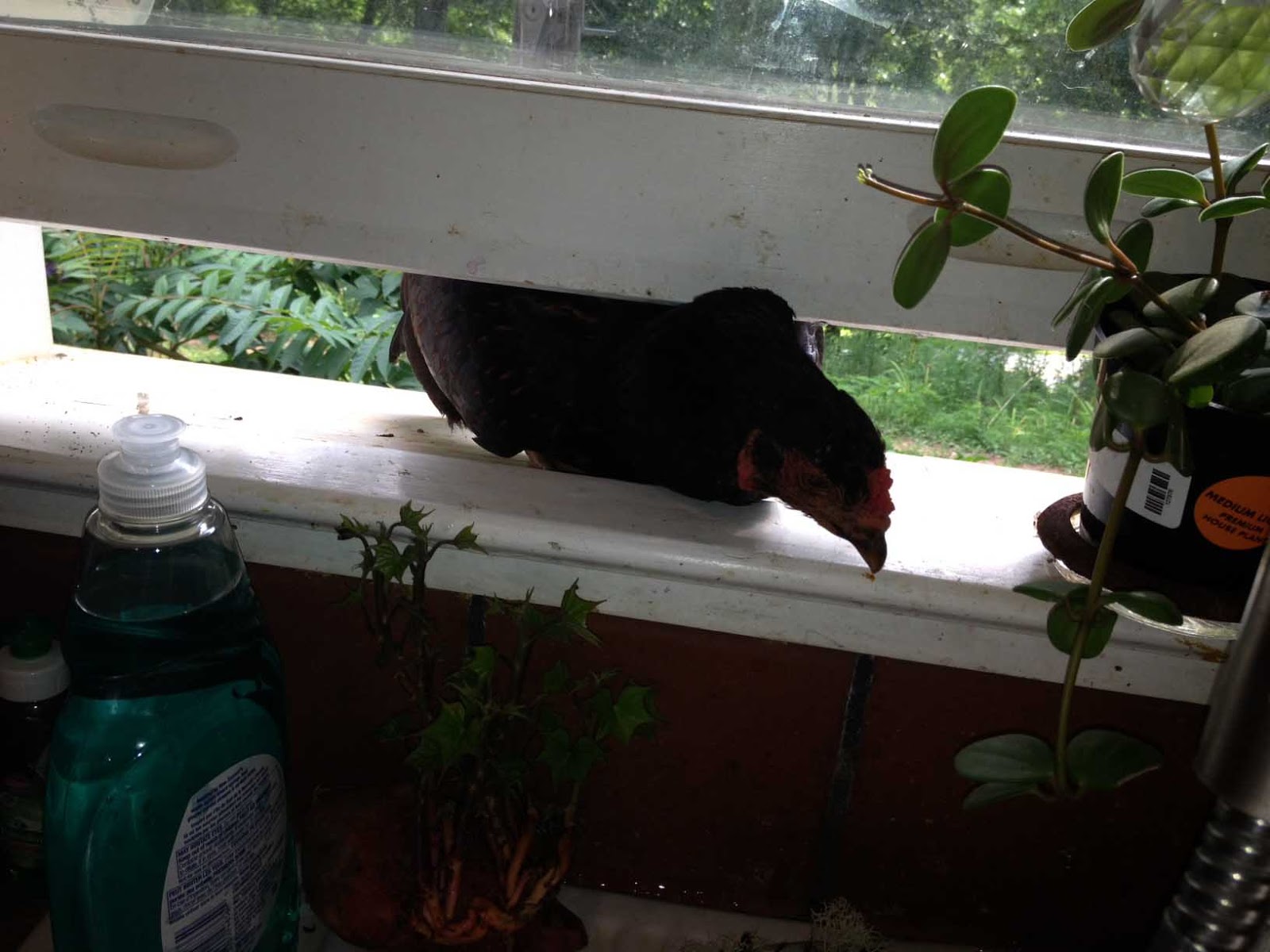 While the vegetables were roasting, Rosetta moved on to the slaw, which was created as a vehicle for the basil. 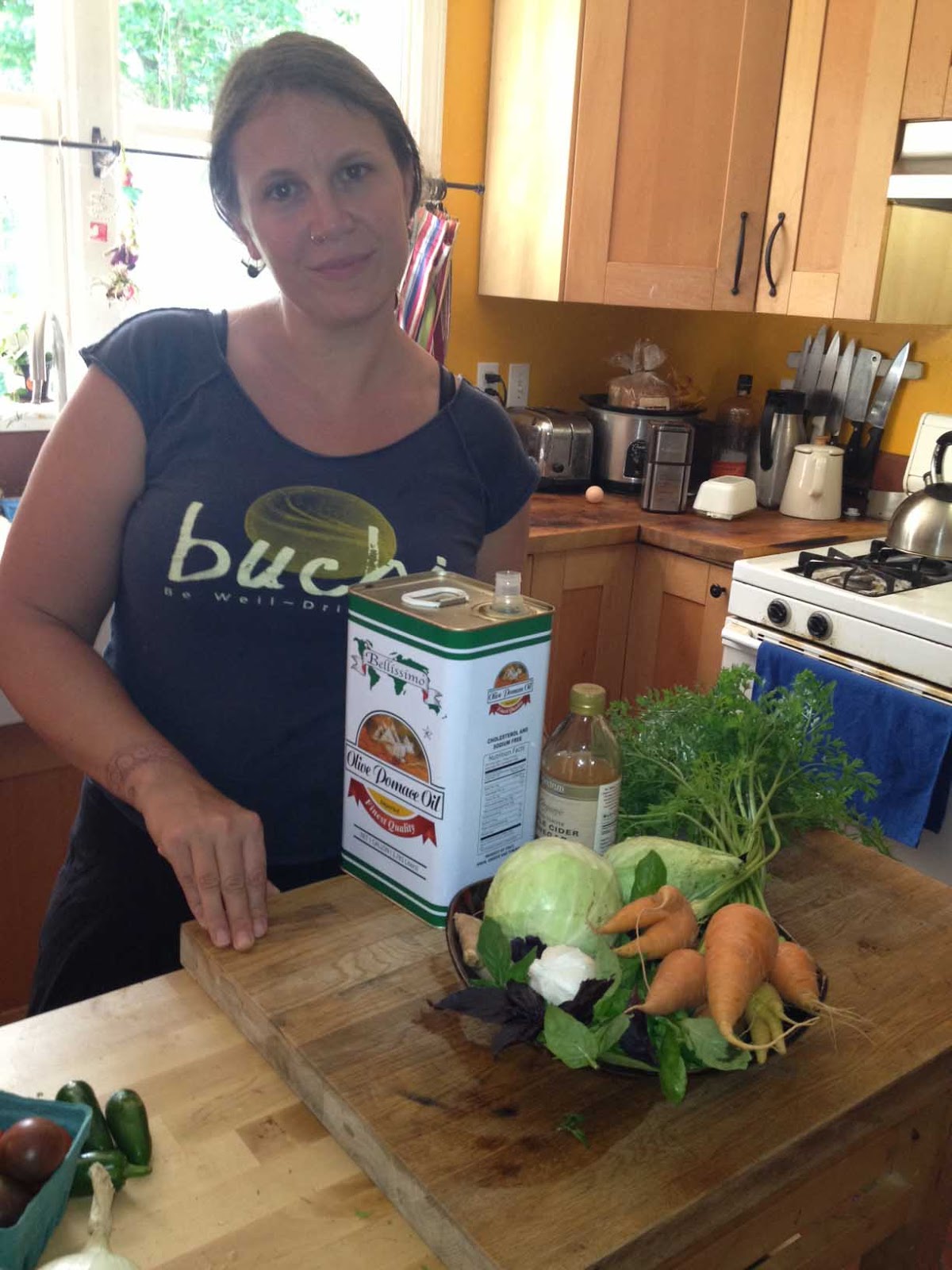 Rosetta and the main players for the Slaw
(although we opted for coconut oil over the olive oil,
as noted below) 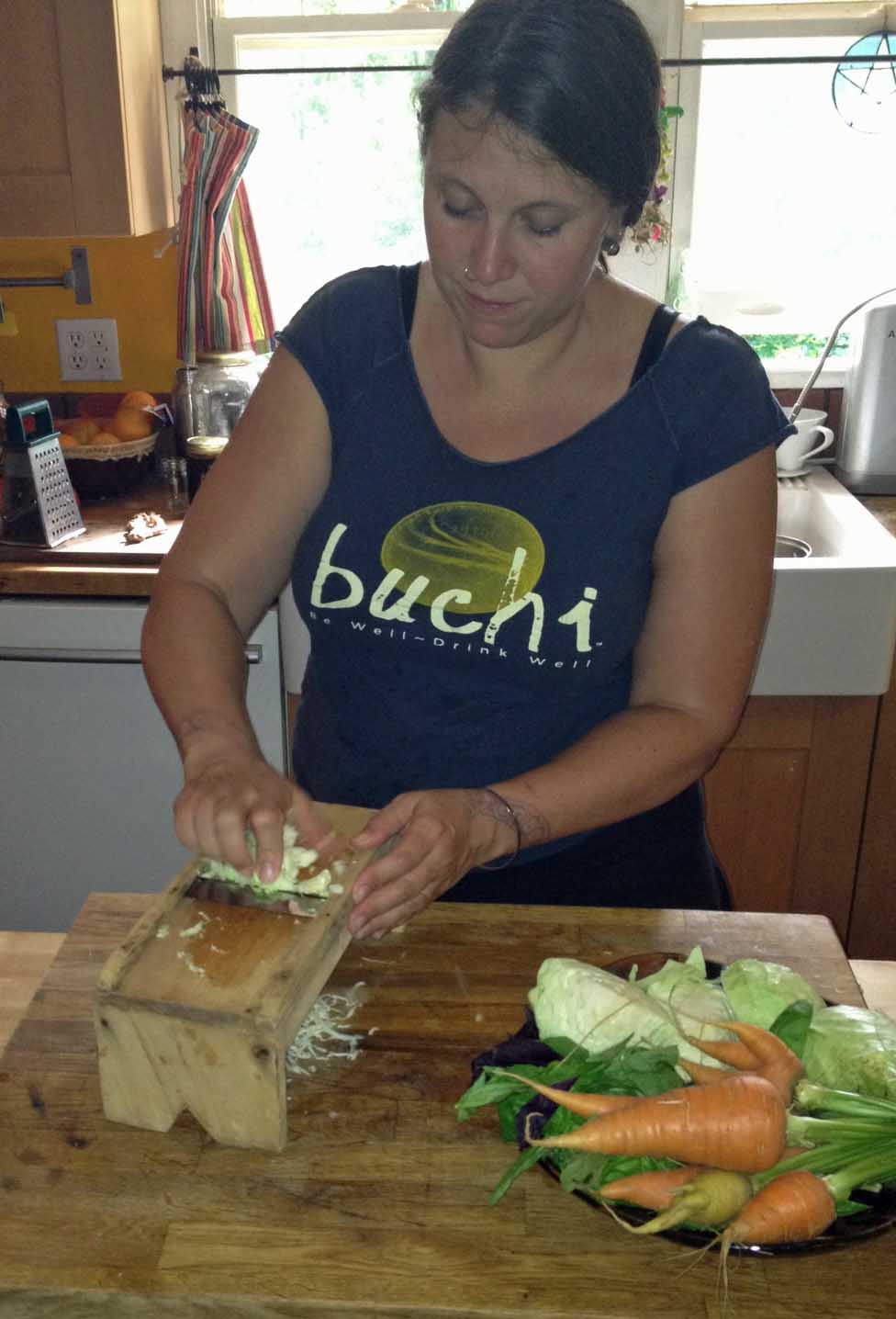 Rosetta slices the cabbage on a
handmade mandolin she bought at the
market place in Masaya, Nicaragua

As you prepare each vegetable, put them in a bowl large enough to hold it all. Add the dressing ingredients on top, and mix thoroughly. 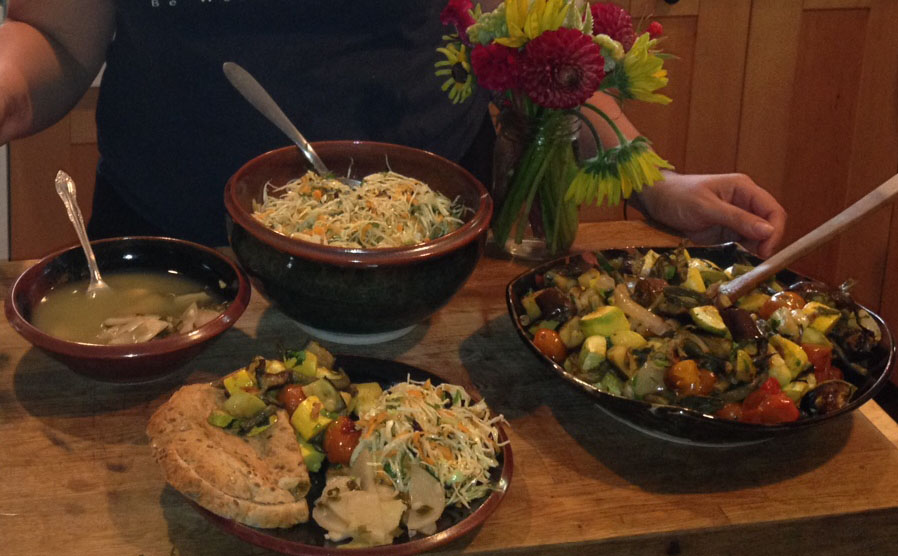 Our meal was complimented by another offering from Rosetta's sister Juniper (in the bowl on the left, and at the front of the plate): Pickled Japanese Salad Turnips, also from Wezeltown Terraced Gardens. The turnips had stayed too long in the ground, and had become spicy, very much like daikon, and pickled with ginger they were the perfect extra bite!

Bonus offering for those who have read through to the finish: 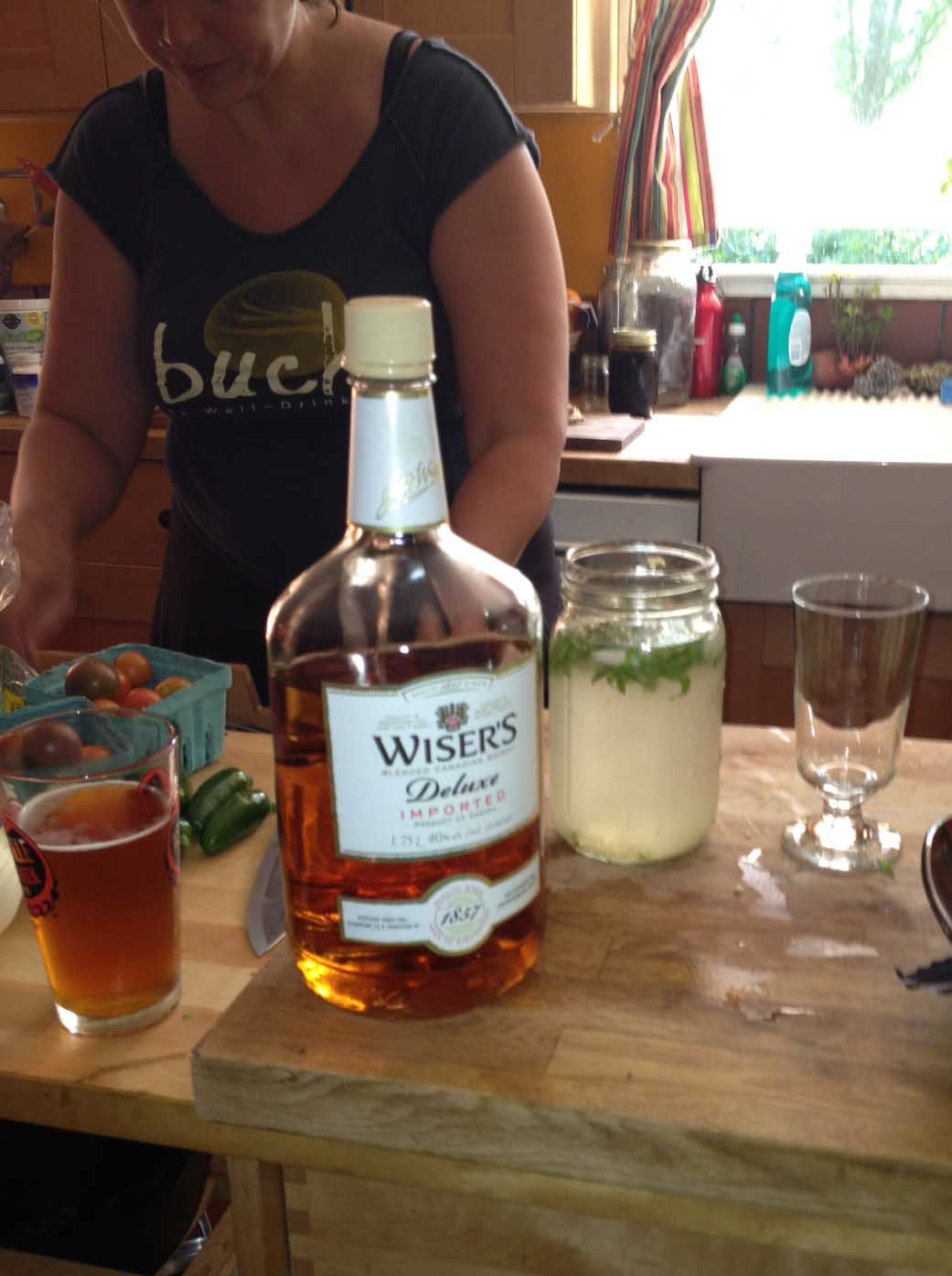 I didn't take measurements here, you'll just have to try it yourself!

Where I'll be this Sunday:
And the only thing more fun than returning to The Big Crafty is doing it with with a good friend! I'm very pleased to be sharing a booth with the excessively talented and lovely Holly de Saillan of Holly de Saillan Clay & Mosaic. Come and see us, along with over 100 other fabulous indie artists and craftspeeps.
The Big Crafty happens this Sunday, July 7 from 12-6pm, downtown Asheville, at the Asheville Art Museum. Admission is free and in addition to a celebration of all things handmade, you'll find local food, beer, and some toe-tappin' tunes.
I'm loading the kiln today for some kiln-fresh goodies to show on Sunday - come by and see what's new!
Posted by CGS at 7:58 AM No comments: