It used to be that a busy studio life meant less cooking. While that's true of 'home' cooking, the increasing functionality of our studio kitchen means I can get an idea for a meal on the way to the studio, and actually cook it up at the studio!

That's sort of what happened the other morning. On the way to the studio, a flyer from my Co-op fell out of one of my bags and I spied a recipe for latkes. It being Hannukah and all, I felt I should make my mom proud and make some for my studio mates. I scanned the recipe and knew I could make it 'more or less' as written, and the results were very well received! 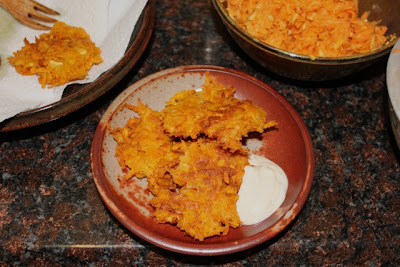 With thanks to the Co-op flyer (I'm sure many who are used to my vague lists of ingredients and cooking process will delight in an actual recipe!) - with my adjustments:

Dust the shredded veggies with the cornmeal, salt, and cayenne pepper. Toss to mix and coat evenly. Lightly beat the two eggs, then pour over the veggies and mix till evenly coated.

Cover the bottom of a large skillet with vegetable oil, and come up the sides about 1/4 inch. When the oil is hot, scoop a large spoon full of the latke mix into the pan, then flatten slightly with the back of the spoon. Repeat until the pan is filled, but not crowded, and lightly sprinkle the flattened tops with sea salt (this side only).  Brown the latkes on each side for about 3-4 minutes, then remove to a plate lined with paper towels. Repeat with the rest of the mix.

I think there are many options to play with in the mix. Half way through cooking these, I happened upon a leftover roasted corn on the cob in the fridge, so I scraped off the kernels and added them to the remaining latkes. Very good! Next time I'll probably add some fresh herbs, maybe some other root veg, maybe do a curried version...

Toppings: The co-op flyer suggested a topping of sour cream mixed with a minced apple. I had a container of coconut milk yogurt (apricot) and used that instead, but they were quite good even without a topping.

Happy Hannukah!
Posted by CGS at 4:49 AM No comments:

Join me in downtown Asheville December 14-16 for some holiday fun and great handmade gifts at Handmade in America!