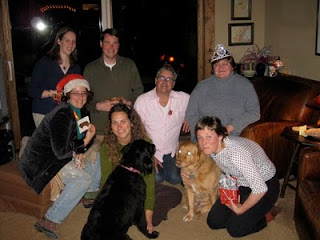 The last kiln is unloaded, all the goodies have been picked up in time for wrapping, and the holly jolly of the season is upon us!

We had our own little holiday celebration at Crazy Green Matt's lovely home, with almost all Crazy Greeners in attendance. The traditional holiday tiara was worn as we had a fun pot swap, and Matt treated us to an incredible dinner. The rest of us brought desserts, and by the end of the night we were stuffed, sugared and gifted!

Here are some images from the fun night - and we hope you're having a holiday season filled with love & laughter! 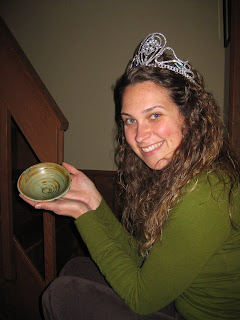 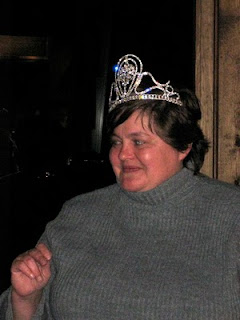 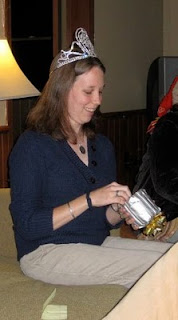 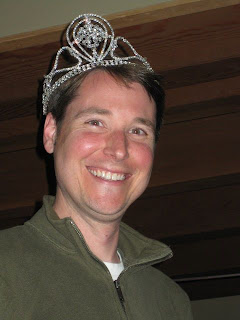 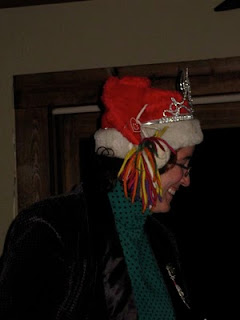 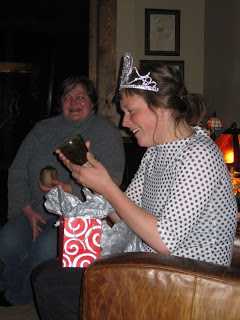 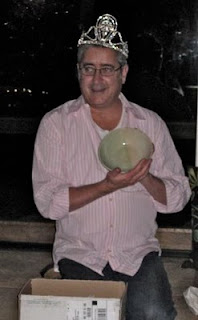 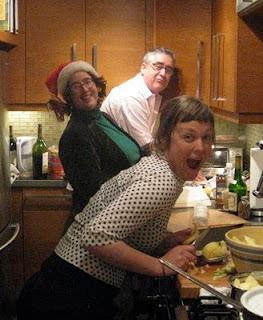 ...just a few images for those who didn't see them already (pardon the repeats for those who have). We got a little weather in Asheville, just in time for the solstice and it's possible we'll get some next week too! Part of me would really love it if I didn't have kilns to fire, unload, etc. right now, so I could just enjoy the snow and be still. And while it made me sad to not make it into the gallery on Friday, hopefully we'll be there next week for those frantic last minute shoppers!

It has been good fun, not to mention good exercise, to trod out into the snow covered streets, lawns, sidewalks to go between home and two studios to load, fire and unload kilns. It's been beautiful to see, a bit treacherous to navigate on the side streets, but much to the credit of the city of Asheville and its people, the main roads were cleared rather quickly and for the most part a good number of people have just stayed put.

And while I did have to get out to load, fire and unload kilns (unloaded one yesterday, firing another today, just helped load and firing another again today), it's been a much more relaxed pace. And in the many treks between home and studios, I've been able to really enjoy the quiet that comes with snow, the insulated feel the air has and the creativity of many neighbors in both how they try to make themselves mobile and how they occupy their time in staying in place. Wish I had my camera for a couple of those sculptures, but you'll just have to take my word on it! Here are a few images from the snowing thus far:

snow hitting the trees when it was still pretty...
many branches are starting to fall from the weight now 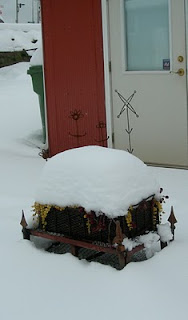 who says flowers don't bloom in winter?
metal sculpture by my studio neighbor Mimi Strang,
enjoying a blanket of snow 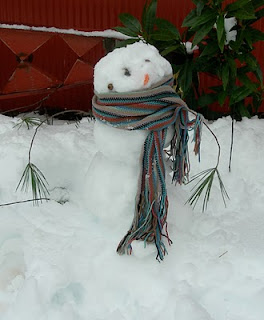 freddie, the crazy green snowman
he's had a bumpy existence but
is still darned happy to be here!


And for those who have been following Lissa's post-surgical recovery:

not so much snow angel as
diving snow bomb...

happier dog? I don't think so!

Greetings from the snowy East-West side! Crazy Greeners who are eagerly awaiting the contents of the kiln, I am unloading today! I'll be back and forth between here and the other glaze studio, so if you think you're going to trek in, please call my cell and give me a heads up. No power or internet at home, so calling is best. Just popped the kiln and so far it looks lovely! Stay warm, safe & have fun in the snow!
Posted by CGS at 6:27 AM No comments:

In need of a stocking stuffer, a gift for the office party, babysitter, mailman, teacher, secret santa...or you? 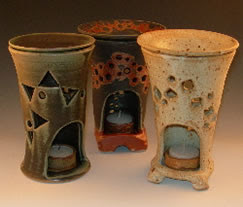 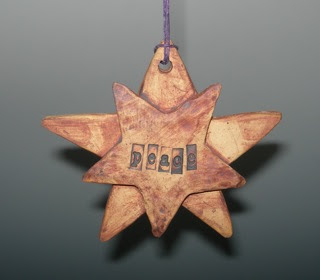 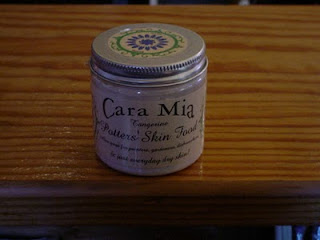 Cara Mia Potter's Skin Food - if you haven't tried it, come by for a sample. Feels great on your hands, whether you're throwing pots, washing dishes or just feeling the winter air. Tangerine and Lavendar, and they're yummmmmy!!

Thanks for Shop West Asheville Fun!

We were quite the close group in Crazy Green Studios for the 2nd Saturday Holiday Art Market and Shop West Asheville, and we welcomed a nice stream of people throughout the day. I'm so grateful to the very talented artists who joined me, and to all the neighbors, friends, clients and first time visitors who came through the doors. Thanks to all!

Thanks also to Matt and Steven for getting a camera to capture the event, as I forgot to charge my battery and found out only when I went to take the first picture! Here are some images of the day: 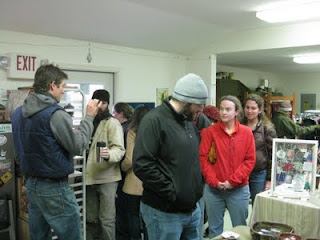 it was warmer out than expected, but we were
still a nice, cozy place to hang with a cup of
hot cider 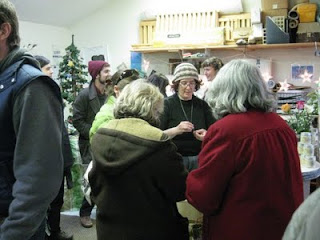 much of the day the studio was filled - at the right end
of the picture you can see the Potter's Skin Food lotion
by Cara Mia Naturals - it was a huge hit and now
available at Crazy Green Studios if you missed it on Saturday. 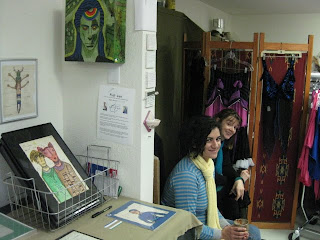 sorry that Gabriel Shaffer couldn't be with us, but thrilled
to have his beautiful wife Suzy repping his work, and giving
us the scoop on Zeytoon. Next to Suzy is Diane, Lady Di herself
with her sexy dancewear creations behind her 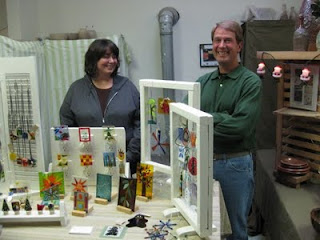 Noel & George of GlasswearNC with colorful and fun ornaments,
bottle stoppers, jewelry & more. I have the coolest bottle
stopper in my bottle of wine as I type! 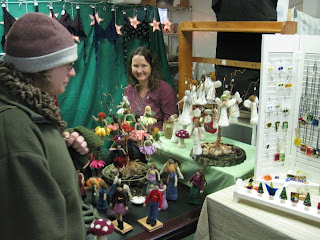 Roberta of Piece Blossom, with her beautiful
felted dolls (one sweet doll will soon have a new home
with someone I know in Atlanta!) 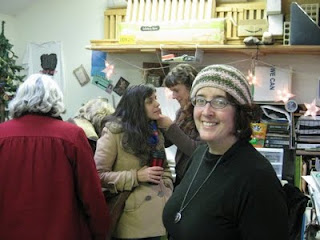 yep, yours truly, with Renee of Repose Jewelry
helping a customer try on her beautiful earrings
(this may be right before I got my own lovely
butterfly wings) 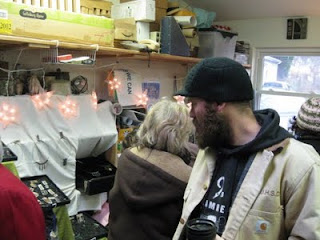 the closest we could get to show Repose Jewelry,
as it was often a crowded corner 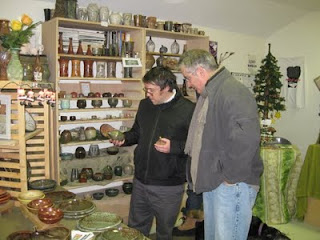 Mr. Big Crafty hisself (l) checking out the work of
Crazy Green Studios member Matt, who was having
the first public showing of his work at the Holiday Art Market
(and many pots have happy new homes!)

Crazy Green Studios is participating in three holiday events this Saturday and doing it all from the comfort of the studios on Domino Lane! How is this possible? Well, the stars are all aligned...

As faithful followers know, I've began hosting the 2nd Saturday Artist Market this past spring and summer, and this Saturday we'll host the Holiday Artist Market at Crazy Green Studios. This happily coincides with the 2nd annual East West Asheville Holiday Art Walk, which is ALSO coinciding with the first annual Shop West Asheville event! We're like the proton in the nucleus of the atom ... Events start at noon on Saturday December 12 and go till 8pm.

Visit the Shop West Asheville site to find details about more than 50 great local businesses participating, the other TWO artist markets, the window decoration contests, the raffles, the carolers, the MUSIC ... if you didn't already know West Asheville was the coolest, this will be the perfect day to check it all out! (also check out the mention in this week's Mountain Xpress)

And here on Domino Lane and in the EWA portion of the hood, here's what you'll find:

At Crazy Green Studios: I'll be hosting an abbreviated version of the 2nd Saturday Market inside the studio where it's warm and toasty. Joining me in holiday mayhem will be : 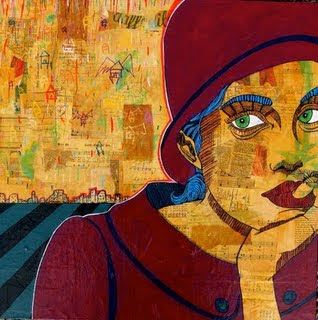 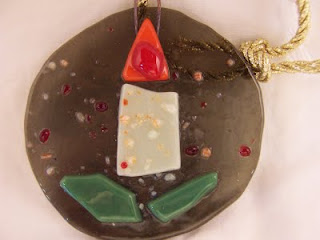 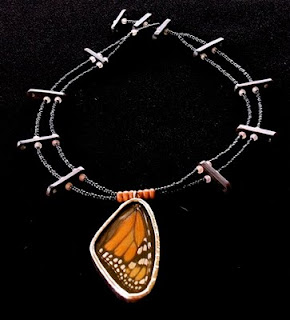 Plus I'll have all sorts of stocking stuffers and great deals for holiday gift ideas in my pottery as well as some from Crazy Green Studio members. Live music is being considered, but there will be music and refreshments too! Check out the 2nd Saturday blog for more info on my guest artists. 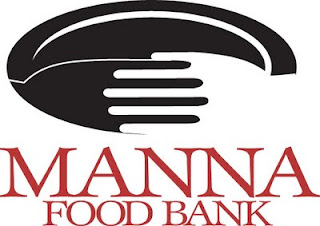 And when you come, please bring some canned food or other non-perishables, as we'll be collecting for MANNA FoodBank to help them help our neighbors throughout western NC.

Next door at Mimi Strang Designs, you'll find great new work by Mimi Strang and that of her guests, Kim Dryden and Simone Wilson.

And while you're in this end of the neighborhood, check out 307 Flash Studio and see Christopher Mello and several great artists he'll be hosting. Down the street, Steebo Designs is another MUST on the artist studio tour, then you'll be right on Haywood and poised to start hitting the shops for more great sales and celebrations, not to mention music at the Rocket Club, dinner at The Admiral ... really I could spend pages and pages just on this small strip of Haywood, and then there's MORE throughout West Asheville!

Don't be afraid of the weather, it's gonna be a GREAT day to get out in the neighborhood, support local businesses and artists and have a great time!
Posted by CGS at 8:07 AM No comments: