ah...I know I must be avoiding the yard-long task list I have before OrganicFest, otherwise I wouldn't be stopping to post these now. But I just got back from taking the pictures, so I'm still in that mode.

To recap, I took pots over to Krug Creative, where Emily Krug has set up a small photo studio and is making it available to area artists to shoot their work at a very reasonable fee. 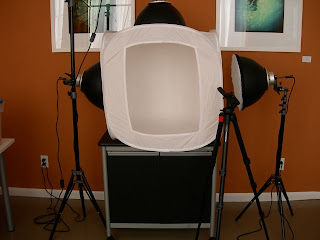 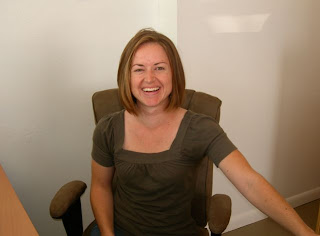 Above: the photo studio set up and Emily!

Here are some of the results of my little shoot. I'm still playing with the camera to find the best settings. The white balance is still doing what ever it wants...but I shall eventually prevail!! 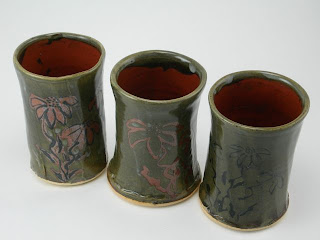 This is a series I did on some cups to test a new glaze combo with brush work, wax work and brush AND wax work. They were a bit dark for all the shots, but I really just wanted them as a reminder. 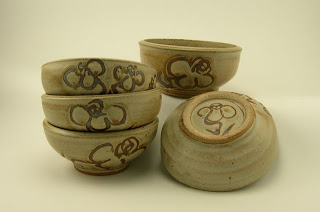 These bowls were testing both a new glaze, new brushwork and a new application of using wax with oxide. I'm having fun with the flower, as it lets me be a lot more free with the brush without worrying so much about where the line goes. I try not to worry about that in the cornflower motifs, but sometimes it gets a bit spazzy. 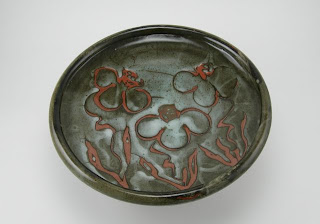 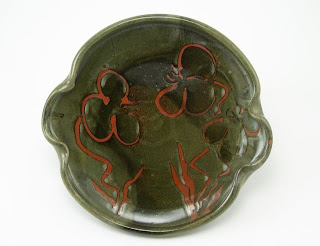 These two are the same glaze combo, different thickness on the cover glaze. I did a couple of platters with the cornflower brushwork, but the wax didn't hold its line as well. Even the glazes want me to do this one more! 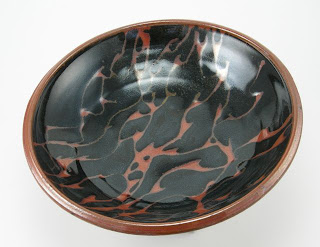 This one was a bit of a leap of faith. I wondered what the combo would do with a tenmoku glaze as the cover, being reasonably sure it would be alright. The brushwork was more abstract and 'let the wax flow' kind of thing that when I was doing it gave me great pause. But a little voice told me to keep going and let the kiln to the rest, and I'm glad I did. Awfully darn shiny for pictures, but oh so nice to fondle! 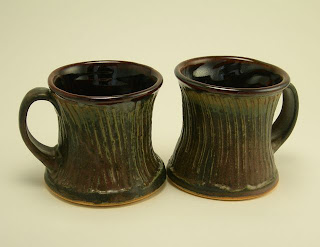 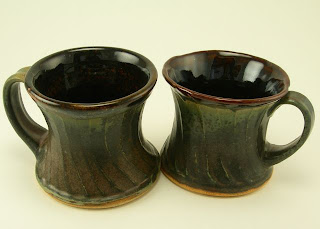 Part of the new series of fluted mugs. Overall, the copper green glaze was pretty gnarly in this kiln, not doing what I'd hoped. These mugs had the most interesting action on them. I'm going to make another copper green recipe to test for the next kiln, but I think if I get the kiln placement right I can get what I want out of the Willie Hillix still. 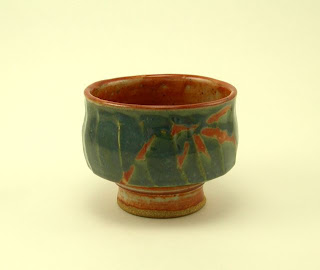 I made several yunomi/tea bowls, partially to work on the fluting technique with trimming and partially just for the fun, since I hadn't made any in a good while. I used oribe as the cover glaze over a shino, and I don't think this picture shows just how blue it went. 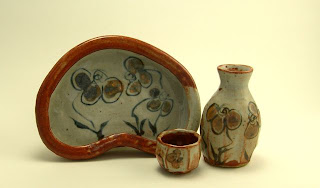 I'm just getting back into my sake sets, and I'm looking forward to doing more tray sets of all kinds. This tray didn't exactly go with this set, until I decided it did when I was glazing. These are the only pieces I remembered to use my 'magic wash' on. It hadn't been coming out very well in the last Odyssey firings, so I thinned it out and played with a different application, but then forgot all about it when I was glazing and decorating the tumblers. It looks a lot more like it should on this, and it certainly makes the tray go with the set now! 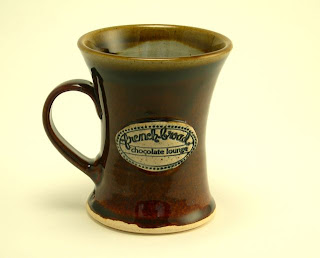 I was bummed on a couple of levels that I forgot to go by the Chocolate Lounge to get some truffles this morning. I wanted to do a shot with them in the picture, and then have myself a little post-photo shoot treat! But I remembered only as I unpacked the mug...I may still have to go later today to get that truffle. Dan and Jael were as happy with them as I was when I opened the kiln, which is always what you want in client reaction! The time we took to test forms, try glaze combos and refine the look really helped me know what they wanted, and it gave them a lot more security in knowing they'd get what they wanted. Can't wait to go try them out...guess it's more of a business trip now...quality control and all...do I really need to rationalize a truffle trip?! 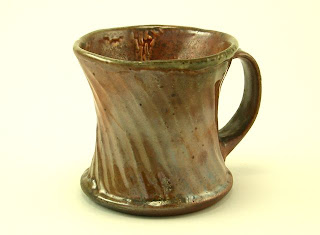 And finally, not from my kiln #1, but Akira's kiln #2. I didn't remember to bring the box of pots I picked up, but I was drinking out of this one so I was happy to be able to get it as well. It was one of the best of my grouping - I only had time to glaze or put flashing slip on a handful of pieces, but this one I dipped in shino. I'll have to check my notes to see if I wrote down which one, but shino is definitely the way for me to go in his kiln. This has some nice shino-y stuff going on in the glaze, a nice little crawl just inside the lip, and I like the way the fluting gives a visual texture behind the texture of the glaze.

Oh, and if you won't be in the Asheville area to come by OrganicFest on Saturday, maybe you want to head over to Charlotte for the Potters Market Invitational at the Mint Museum. Akira will be there, as will Kyle Carpenter and many other talented folk.


Ok, my little break has gone on long enough. Time to clean the studio, inventory the pots, price them, pack them and start putting together the booth for Saturday. Oh but first perhaps I'll just have a little chocolate...
Posted by CGS at 1:55 PM