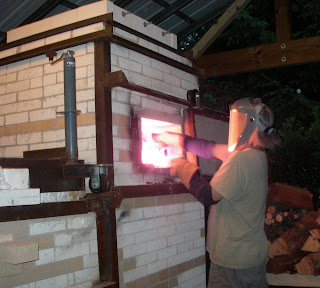 I know, still no pictures of the new studio. I forgot the camera earlier in the day when I was there, but it's in the bag for tomorrow, so have faith and patience! I got a lot of planning done today, moved a few more things from Odyssey, had a delightful lunch with Jane in the new studio 'hood and picked up Heather's csa box o' food as she's out of town. Then in the afternoon I went up to Akira Satake's studio to visit during the inaugural firing of his new train kiln. A year in the building/site prep/firing planning, and I'm sure worth the wait, it's a beauty. He was nice enough to put a few of my pots in even though I was only available to come visit. I did bring kale and chard, which could be some culture's traditional gift of greeting and gratitude, or it could be what I had in the car (thanks ht) when I realized I forgot the blueberries I had intended to bring. A lovely green bouquet on a fabulous, breezy summer day! Akira (aka 'Bob Dylan') is firing this first load with Judith 'Yoko Ono' Duff, and it was great to watch and listen as they watched and listened to the kiln. I still had no camera, but knew I'd be back later and hoped to get a picture of Bob & Yoko at work, but Judith had left by the time I returned so no duets captured on film. I'll head back out on Sunday to snap pics of the opening too.
Between kiln visits, I raced back to town for the Studio Stroll wrap party at 12 Bones bbq, had some eats and drinks and chats with other RDA members and even won a door prize - two very sweet tiny houses by Matt Jacobs. My real estate empire is begun! The RDA member 'fun facts' game for door prizes was fun, and for any of you who were there yes I really was in a Freddy Mercury video. And that's all I'm gonna say about that for now...

And between 12 Bones and back to the kiln, I even managed to pick up a nice mini fridge for the new studio. Mini fridge, Foreman grill, bag o' bones for the dog and we'll be ready for business!

Tomorrow wheels go into the studio and maybe some more furniture. Very sleepy, g'nite.
Posted by CGS at 7:55 PM