No new pictures of the new space, but it's coming along. Kind of in that state of half moved in, half unpacked, half put together, half there at all. That, and my camera battery died right after I took the pictures posted below (or perhaps it was the shock of the studio that stunned the camera into a coma!). In the new space, I added some new shelving and a table for my desk, got the new cubby in and put a couple of coats of poly* on it, and ran a few trips worth of moving the pile that will be coming from the current studio. *I'm using a blend of BioPoly and citrus solvent - much nicer to smell and much nicer to the environment. I can even compost the rags I used to rub it into the wood after they soak in water. I don't have the paperwork on it all now, and I can't remember the names, but talk to the folks at Build It Naturally in Asheville if you want to know more.

The earlier pictures of the new studio are billed as the 'before' pictures, but this is really the 'before' - my current studio, with great horror and shame to even be sharing this with anyone other than those brave enough to venture down the hallway... 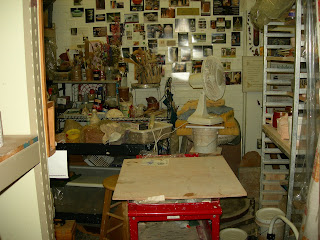 It all happens so fast, one day you have a neat little space with tools in the proper place, reclaim drying evenly on the plaster and greenware stacked on the shelves above the bisque waiting for glaze...an then in an instant of prepping for multiple firings before stroll and finishing commissions, participating in a workshop on the other side of the studio - my space pretty much became a dumping ground. Add to that the week's worth of running around to get the new space up and running. Amazingly enough, I've actually been working in here too! Got the decal samples back, and they took fine enough but I still think it should be better. More tests. And this week throwing again too. That's my wheel somewhere under the fan. sigh.

I didn't make it out to Akira's to see the kiln opening, but he's going to have a studio party soon enough. Next week is his workshop, which I'm looking forward to. It'll be nice to be back in studio and into the clay again after a week of 'the business'. I'll also get to work more on various orders that have been waiting for finishing, some for starting. Gotta keep it straight or everybody gets kohiki!

Ok - early up for day 1 of the workshop, so time to get the pup out for the last walk of the day. Closing the studio for the day - good night! 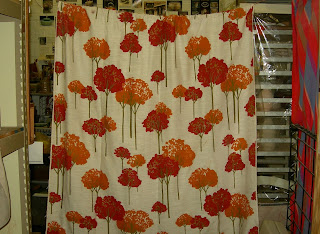