it's been a Rosetta kind of weekend!

And a delightful weekend it is! I just finished uploading some photos from weekend fun, and realized one of the nice threads running through it...

Friday after hitting some of the First Friday openings, friends and I ended up at Rosetta's Kitchen for dinner...and it was good. 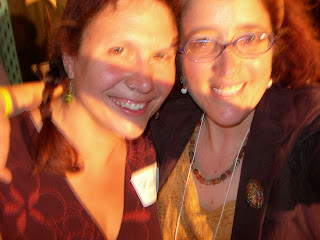 another for the one-armed gallery o' photos...


Saturday, after streaming through Lexington Bazaar and Howard Street Handmade's Craft Sale & Swap, I managed to get some work done at the studio before attending MANNA FoodBank's annual Blue Jean Ball ... where much to my delight I find THE Rosetta, with Jack dishing out generous helpings of the Family Favorite...and it was good.

And this morning, before opening the studio and getting back into the clay, I streamed through the inaugural People's Market, hosted by the afore-mentioned Rosetta herself, surrounded by an army of young helpers dishing out lemonade and other yummy goodness from the Rosetta's Kitchen, conveniently located right across the street. 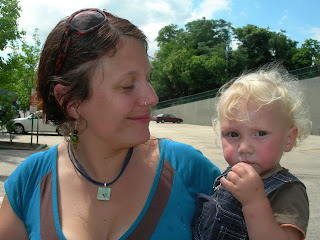 Rosetta & little man, just after he doused them both with lemonade 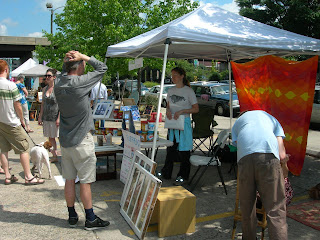 A beautiful day for a Market, and the people were just arriving as I was there early, but it already looks like it's going to be a favorite Asheville Sunday tradition!

see more pictures from the Market at the Asheville Street Markets blog
Posted by CGS at 9:17 AM