deep thoughts from the firing...

Actually more of a musing. As I look forward to opening the kiln tomorrow, I think back to the waning moments of last night's firing. 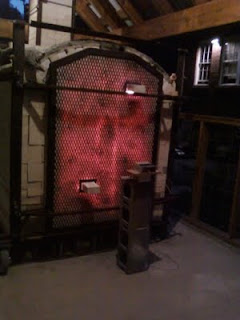 Having pushed into reduction a little early and slowing down my early pace, it was a bit later than I had hoped as I waited for the last cone to drop. Maybe it was being in the warmer clime all day, maybe it was the pace of the week leading up the firing finally catching up to me, but all sorts of strange things float through one's mind at these times.
I do believe, that at some point while waiting for cone 10 to just move-already-is-that-too-much-to-ask on the bottom shelf, I may have solved the debt crisis and perhaps come up with at least three solutions for various world conflicts. But just as those lucid moments of a really interesting dream seem to fade away as I open my eyes in the morning, so too did these profound discoveries when I finally pulled the peep and saw enough of a bend in that last cone. What was it I was just thinking? Who cares, the cone is bent! That may not remove the debt crisis, but it sure removed the final obstacle between me and a cool pale ale at home.
So those big secrets are still locked in the far corners of my mind, but I do believe there will be many fine discoveries when I open the kiln tomorrow.
Posted by CGS at 10:51 AM