Results from the recent kiln...

Unloaded both the reduction kiln and a mid-range kiln this week, and had some good tests, some great tests, some continuing frustrations, some pleasant surprises, and still some that just make you go 'hmmmm....'.

And then there was also the sagger test: 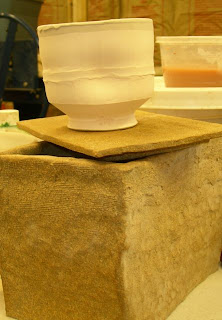 The nekkid cup on top of the sagger. Actually there's a honey celadon liner inside, you can see a bit of it on the rim. 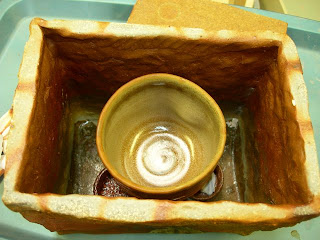 The 'after' upon opening. The overhead lights and unfortunate flash kind of blur the interior, but the honey celadon looked good... 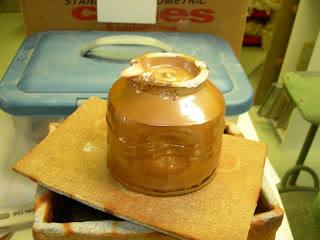 The wadding got a little to flattened out, and some of the salt oozed up onto the foot. Unfortunately, I broke the cup when trying to grind off the excess, but it was still a good test overall. The clay body was the Laguna B-Mix w/helmar, and the earlier tea bowls were zelastone. As I do the shot cups, they may be a variety of clays, and some will be glazed in saggers, others will have their own little thimbles of salt.

Other things in the reduction kiln: 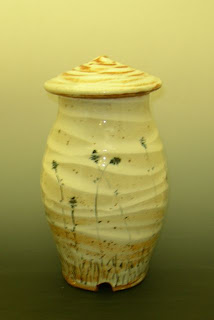 A new way to play with shino - ribbed slip on the pot, then my regular shino layers with the underglaze brush work between. I'm working on a series of smaller vases to play more with this... 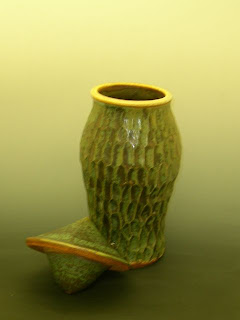 Another covered jar, part studio demo, part me playing with a carved facet I haven't done in a while, but I love what this copper glaze does on it. The lid is a hollow form with bits of clay inside. Why does this lid need to be a rattle? Well why not! Actually, this is a demo of a pet urn I've made before, I just needed pictures.

A bit of a side-track. I've been working with a copper green glaze in our oxidation firings. I'm not trying to replicate or replace the reduction 'crazy green', but I did want to get one for mid-range that made me happy. This cup came out of the recent cone 7 ox kiln: 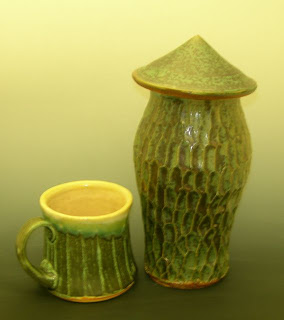 it's become a very popular glaze for the members... 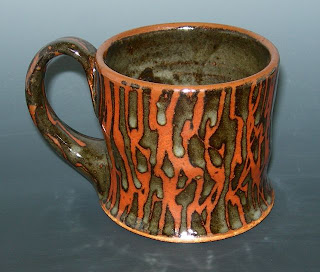 a new mug form I'm doing for the Sparrow Spa, that I quite like. I've been wanting to do the 'dancing brush' design on other forms, and this was one of the pleasant tests. 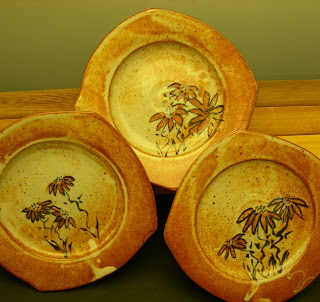 Another in the series of unending tests to get that gold shino back. This is still a bit more orange than the original firings, but it's closer.

I'm not posting the ChoLo mugs - they were both a frustration and ones that made me go 'hmmmm....', but I'm going to try something else and I'll hold off on that little series of trials and errors (mostly errors lately!) until the next firing. 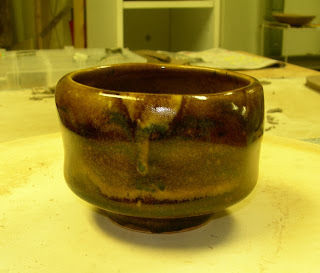 Another result from the cone 7 kiln - this is studio member Matt's sweet tea bowl. He's layered glazes with a black underglaze, and got a nice result...

...I'm tempted to post pictures of Scott's cups, as he hasn't made it into the studio in far too long, but I'll just leave this mention of them as a teaser to get him in here to see for himself (then I'll put pictures up later!). :)

Back to the wheel - saw the wonderful opening at Clingman last night - it looks great, get down there and get something before the red dots completely take over! The show is great, but it also showed me there are a lot more shelves than I remembered, so I better get more stuff into the next kiln! peace.
Posted by CGS at 1:02 PM