quickie for a test

Well they say the 7th time's the charm, right? It's been crazy busy at Crazy Green, but I've tried several times (let's say six) over the past week to put up a new post, share some updates, a few images ... technology was not in the mood to play along.

First, I had images stuck in my camera. I could see them in the camera, but they wouldn't upload to the computer. I did have a few other random images of getting ready for the kiln I'm about to load tonight, but when I tried to post, no images would load and even a text-only post just didn't want to go. I took that as a sign from the universe to step away from the computer and get back to studio work.

Yesterday I closed the studio and spent the day in the glaze studio - thanks to my visiting friend Karen sitting the studio on Thursday night, I was able to move all the bisque over to the glaze studio and get set up. I had waxed most of the pots at my studio, so after set up and waxing the pots that came out of the last bisque fire, I was ready to glaze. A full day and into the wee hours was almost enough time to get it all done, and this morning saw the last of the wax resist and cover glazing. I'm back at my studio for a few hours for open studio, which is kind of a break, but for loading another bisque so I can also fire a cone 7 before the Clingman show load-in. Later this afternoon I'll head back over to the glaze studio and clean up my pots as I start the load.

So this is kind of a test - so far so good, and in other good news, I finally retrieved the stuck images from my camera. I'll close with the pictures, just so I can see if this posts. 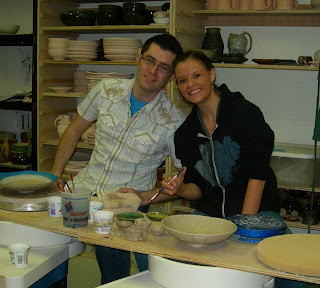 Caroline & Matthew came to the studio for a Weekend Pass, and they made a couple of lovely bowls and some other small fun pieces. If you're reading, Matthew & Caroline, your pieces just came out of bisque, and I'll be loading them with my cone 7 glaze load on Tuesday, so they'll be ready for you this week!

This one is just because. I thought I had deleted it from the camera, as it was one of those random shots taken while I was fiddling with the settings on the camera. I've cropped it for dramatic/artistic effect.

Yes, this confirms both that I'm very tired, that perhaps I need to get out of the studio more often, and most definitely that I need to remember to put the shea butter on BEFORE I start working with the clay. This is part of my hand. 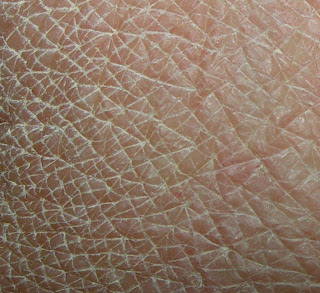