The first day in my Saturday...

You'd think that after I carefully laid out my plans for the next few days, it would be a done deal, but noooooooooooo.....

This morning was up and out almost on time, with a few diverted stops here and there and on the road to the Spruce Pine Potters Market only about 20 minutes later than I had planned. This was the firs

t 'sign', that struck me as such to the point that I took a picture.

But I carried on, and even though there was more construction to navigate once I got off the highway and was headed toward Spruce Pine, when the radio said it was 10am I was maybe only about 10 miles away, so the schedule was lookin' good!


And then it happened:

(this is cropped not only for the drama of the moment, but also to mask the dog hair that has accumulated
on my dash and only noticed by me when I downloaded this shot...)
Or rather, it didn't happen. Accelerating up a small hill (relative to the hills we have here), George Bailey, my trusty Volvo, just stopped. Well, he lost power and I had enough momentum to pull off the road, thankfully, but then he stopped. And so did my plans for the rest of the morning, including most regrettably the trip to Spruce Pine.

And may I just add that to this point in the morning I had only consumed one rather large cup of coffee? I really wanted to look under the hood, knowing I know not much at all about what's under there but hopeful perhaps something popped loose and there was a label beneath the missing hose/plug that said "there should be a hose or plug here to run properly!" ... I couldn't concentrate because the coffee was, as a friend of mine was fond of saying about cheap lite beer, 'runnin' right thru me'. And no businesses (open ones) or accessible doors to knock on, so I could only focus my brain cells on THAT. While I was waiting for the tow, my next challenge was to figure out where to take the car. I was closest (oh, so close!) to Burnsville, and figured I'd find a shop there, so I also started trying to figure out how I'd get back to Asheville, assuming I'd have to leave the car. At this point, friend Melissa calls to coordinate getting some pots into my glaze kiln next week, and when I pour out my sob story to her, she offers me one of her cars to use for a few days while mine is in the shop - a glimmer of hope and a truckload of gratitude for something I hadn't gotten around to thinking about!

So I started checking shops in Burnsville and Spruce Pine given to me by my road assistance folks, only to find that they just don't work on cars on Saturdays in Burnsville. I called the next of several friends and Julie, who would ride to my rescue again later, looked up the shop where I take my car in Asheville and found it had Saturday hours till 3pm. A glow of hope and more gratefulness for friends near a computer! Julie was crazy busy getting her load glazed (she's firing tomorrow), so I opted to go down the list to see if I could find someone else to meet me at the shop and get me to Melissa's car. Melissa had offered, but she had to get to work. Holly was already on her way back from Madison County with her newly adopted dog, so I checked in with her to see if she might be able to help. She was willing, but on call as another friend was about to deliver a baby and Holly had promised to be there. I got through the list and back to dear Julie, who agreed to be a last resort, so I stowed that away and waited for the tow.

The tow actually made better time getting to me as well, and a very pleasant and talented driver (who's name has now dropped from my brain, sorry!) got George hooked up and on the truck in no time. Lissa got the rumble seat ride, and while she was very well behaved and laid back through the entire morning, I don't think she was pleased about it at all in spite of my cheery encouragements. 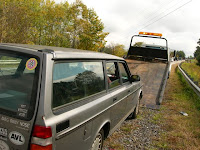 So we're back on the road, heading back the 35 miles or so to Asheville, and now I'm looking ahead again to getting picked up at the service station. Holly had said to check with her again, and when I did I found out she was a few miles ahead of us in a big accident-related traffic jam. Unfortunately, we didn't find this out in time to get off the highway as soon as we'd have liked, so we ended up in that jam and then in in-town traffic for the next 20 minutes or so. We even passed Holly on one of the town roads, so I got to see Chagall, her new pup, although I didn't have fast enough reflexes to get out the camera to capture the moment. Since she was still in traffic and trying to find out if she needed to go to the hospital, I called on Julie, and she agreed to meet me at the station.

We arrived at the station (and if you're keeping score, I still hadn't found a bathroom), and it was 2pm but the station was closed! Worse yet, the entire lot was locked behind a big fence with 'guard dog' warnings and tow signs on the outside. The glow of hope was starting to dim, but I decided to go into the business next door and ask if I could park the car in their lot till Monday morning. What did I find but the father of my mechanic running the store, and most willing to unlock the gate and let us put the car in the lot AND let me use the restroom in his shop. Hope is a flood light again (no pun intended)!

So Julie rescued me and took me to Melissa's, where I picked up the uber-Asheville-cool-yellow-diesel Mercedes, and I'm back at the studio ready to start making up for just a few hours of lost time.

I am very bummed that I didn't make it to the Market, and without my own ride and the lost time, seeing it tomorrow is definitely out of the question - but on the up side I have to say it is a beautiful day out (ie not raining), I got to see some early leaf changing, met very nice helpful people and while a car expense is not something I ever plan, much less right now, in the big scheme of things I still have nothing to complain about. Good friends and friendly strangers trump any inconvenience in my book, and while it seems far off right now, I'll just have to see the Market next year!

And now to the second day in my Saturday - time to get stuff over to the glaze studio and start mixing glazes. Photos from this point on will be far more interesting, appealing and if entertaining, it'll be in the way I intend! peace and safe travels...
Posted by CGS at 12:52 PM

Email ThisBlogThis!Share to TwitterShare to FacebookShare to Pinterest
Labels: close but no Spruce Pine, reading the signs