I don't think this is in the official 'Hallmark' calendar of celebrated special events, but today is in fact World Food Day, and it's also the day of the annual Empty Bowls luncheon to benefit Manna Food Bank.

I got off a couple of snappy photos, but then the doors opened and it's all a fabulous blur of people streaming by and bowls streaming out. I'll report the official numbers once I get them, but we estimated starting the day with close to 800 bowls, and when I left the number of bowls left fit on one table, and the Collector's Corner had been run through faster than a blue light special.

Some quick highlights, then I'm off to bed for an early rise and packing. Tomorrow I open/unload/pack the kiln and head down to Atlanta. If you're in that area, come by and see me at the Smyrna Fine Arts Festival on Saturday!

Some of the day: 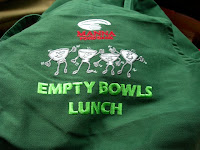 These sporty aprons feature artwork by Asheville potter Paul Frehe, who also donated many, many bowls with the same dancing bowls that quickly danced out of the room. A special note about the aprons - these aprons were given to the volunteers who helped keep the event running smoothly, and it was thought they had a sponsor to cover the costs, but as it turns out Manna will be billed for them. Because everything (bowls, food, space) is donated for this event, all proceeds go directly to Manna so they can do what they do at the food bank, and funds were not allocated for the aprons. So if you missed the event but still want to help out, you can send Manna a donation and designate it for the 'aprons' (you may even be able to buy one if you want, they're quite nice!) - if you do, Manna will send you a thank you letter for your donation. Bring it by my studio and you can pick out a bowl! 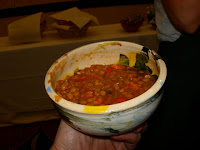 You may recognize this bowl from my open house, it's the one decorated by Sam Rattigan. I wanted to make sure his mom got the bowl, so I 'borrowed' it to have my lunch in before the doors opened. It nicely held the lentil soup from Corner Kitchen, and as the spoons weren't out yet, I can also attest to the slurping quality of the lip (she said with no modesty at all, realizing it's a bowl she made herself). 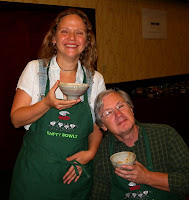 More pre-show slurping, with Heather Tinnaro, who was one of the Bowl Project guest potters as well as event day volunteer, and John Hartom, our fearless if not somewhat sleepy leader (both sporting much sought-after bowls by one J.Hartom). 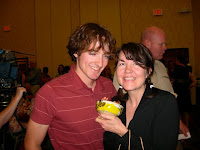 In a rare, dual public appearance outside the French Broad Chocolate Lounge, both Dan and Jael Rattigan came to support Manna and claim their prize! This was pretty much the last picture I could take - the crowds just didn't stop and I didn't look up till it was time to go!

I left the lunch, sped downtown only to take a leisurely drive around the block several times to find a parking spot so I could run (almost literally) through the Craft Fair of the Southern Highlands at the Civic Center. The Odyssey booth looks great, and while all too fast, I did get in quick hellos (but no pictures darn it!) with several friends and just enough time to wish them well before dashing back to the studio to get ready for the afternoon class. My students are most patient and accommodating as the studio continues through its growing pains and close quarters - today we did hand building demos and putting the slab roller together does all sorts of interesting things to the space! The poor studio does look a bit ransacked right now...and no there are no pictures of that, thank you! If you want to see nice studio shots, check out Kyle Carpenter's blog - he came to the open house and posted some pictures from his visit. While you're at it, hop down to Clingman Cafe to see Kyle and is Clay Space Coop (including the above mentioned Heather Tinnaro) studio mates in a wonderful show in the Cafe. I ran down tonight for the opening reception just before it closed - the show will be up for the rest of the month, and while you're there grab a bite, the food and coffee are great!

The laundry is churning and I'm soon to catch up on some sleep. Tomorrow has an ever-growing to-do list, but I'm only thinking about opening that kiln! peace.
Posted by CGS at 7:56 PM