It makes sense that the last day of the workshop, we'd be wrapping up projects, reviewing notes and digesting the week's information. Well we did that (and digest more good food too!), but the last day was no less a continued exploration and adventure as the rest of the week.

We met as became our ritual at Roots for yet another great breakfast, and while there we met up with Eileen & Marty Black of the nearby Potter's Mark studio. They were about to open a kiln, and kindly invited us to come by and tour the studio and see the results. Unfortunately, I did not have camera in hand to document that, but it was great to see yet another studio layout, see the results (great firing!) and talk more 'shop' with two who have pursued a passionate life in clay. Matt even discovered (possibly, yet to be confirmed) that a gifted batter bowl is likely to have come from Eileen & Marty's studio. kind of small world we love!

At the studio, we had yunomi to trim and our little batch of test lizella to throw. Matt had trimmed a couple yesterday, but they were a bit wet so the rest were saved for today. One trimmed yesterday sports added 'organic' elements: while trimming, his tool caught an edge and sent the yunomi flying off the wheel and slamming against my tool cart, landing in a nice pile of dog hair. I knew he was a full fledged Crazy Green potter when he calmly picked it up, blew it off and put it back on the wheel and kept trimming. 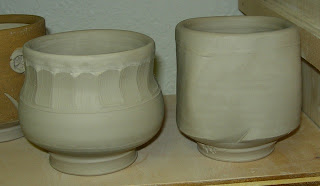 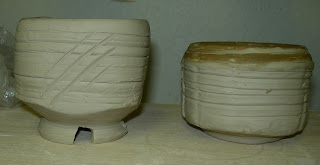 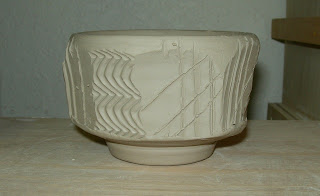 our yunomi fun - it wasn't about quantity, it was about our exploration of the form,
and it came in many ways, both on and off the wheel.
My aim to get Matt more comfortable on the wheel had the best evidence of success when he said he wanted to throw the lizella on my kick wheel! Not only have I restored his comfort on the wheel, but after a demo and his own go at making a few guinomi (sake cups), I have a solid kick wheel convert! The lizella was very nice to throw, and I'm looking forward to some fun firing tests with that later. 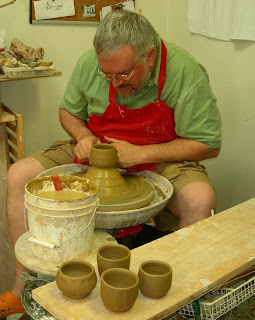 Matt, falling under the spell of the kick wheel...
Once all trimming and throwing were finished, it was time to pack up tools and wares, as the rest of our day was outside the studio. 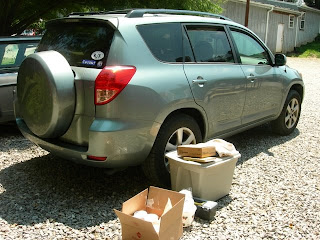 stuffing a week's worth of goodies into the car for the trip home...

Our first stop ... can you guess? Lunch! One final visit to Roots, and Matt and Lisa succeeded in working their way through the menu. It was the perfect place for us to start and have our mid day break for the week - great setting, great people, and you may have gathered from earlier comments, really great food! As a token of appreciation for taking such good care of us all week, Matt gifted Katie with one of his vase frames, complete with sunflower. It's hard to tell for sure, but I think she liked it! 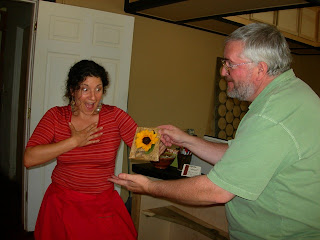 we swear, it's not a staged shot!
Well fed yet again, we headed out for a few more studio tours. We were on more of a schedule, so I didn't keep the camera with me here, but follow the links to see what we saw!

First stop, Clay Space Coop, where Melissa Weiss was cleaning pots from her latest wood fire. We saw great work by all the Coop members in their gallery, coming close to licking several very yummy pieces.

Next was a visit to Constance Williams studio to see her encaustic work, then next door to the clay artists at the Curve Studios, where Maria Andrade Troya and Jenny Mastin welcomed us to crawl around while they worked.

After that, it was time to shop! Matt wants to try some of the glazes I use, as well as the oxide washes we used on our tests, so a stop at Highwater Clays was a must. Jennifer was there, so she got to see some of the firing results that came about in good part because of her earlier suggestions. Well stocked with glaze materials and a few new toys...er, tools, it was time to say goodbye to Matt and Lisa. We met at Highwater at the beginning of the week, and it was a natural completion of our adventure to end there.

It was a great week, and I know I'm taking away as much from our time and discoveries as Matt has, and will continue to as I know he'll be updating me on his own firing results, using some of the new techniques and firing programs that we explored here. And I'm very interested to see how he continues his wheel work, although I also came away with a few new slab techniques that I'm looking forward to trying myself.

And in addition to the great information, deeper friendships and new inspirations, I also have great treasures from both Matt and Lisa. From Matt, one of his slab built yunomi cups from our test firing, and from Lisa, delicious refrigerator pickles that she says will last a month, but I highly doubt it! 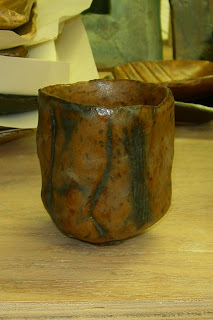 newest addition to my yunomi collection 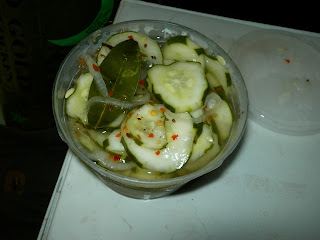 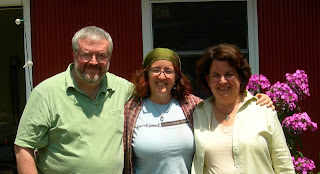