It's intriguing to me that time can seem to scream by and go in slow motion all at once. That's what the past week has been like, seeming always to chase more time yet feeling like I'm kind of walking slowly through a movie that's run on a faster speed.

The bulk of the activity came over the weekend - got the last pots out of the bisque fire on Friday, spent Thursday and Friday waxing and laying down base oxides or underglazes, mixing glazes then packed it all up and carted it over to the glaze studio. Normally, I'll do this several days before I load, giving myself separate chunks of time to organize the studio, put on the base glaze and start brush work and wax resist, leaving the day of the load to add cover glazes. Normally, I'm also sharing the kiln load, so the volume is smaller too. This cycle, time was not on my side, and I was left with Saturday as the day to pretty much do it all.

Just getting set up to work comfortably can take a while, and because I had the full load, I was determined not to rush through any part of it. Been there, done that, did not even want the t-shirt. I had been mildly concerned that in spite of my efforts to make sure I had kiln fillers as well as all the commissions covered, I'd get stuck with uneven layers or even not enough to fill the kiln well. Not a problem - the first challenge was just getting some of the single glaze work done so I could load the first shelf and have more room in the studio to unpack the rest of the bisque. The tempo started to crawl once I started the brush and wax work.

I'm finally at the point where I do enjoy the glazing process, and much of that comes from slowing myself down in the process as much as possible. Having a mere 24 hours, some of which gets sucked away in getting ready to do and cleaning up after the process (along with that sleep thing I keep hearing about), doesn't really contribute to an environment of relaxed tempo. But I'm pleased that I did keep a comfy tempo, and by just after 11pm I was about half way through the wax work, and had finally unpacked the last box of bisque, giving me at least a visual cue to when I would be finished!

This altered Sunday's plan, but luckily I'm just blocks away from my studio, so a note on the door kept me from feeling guilty for not being there when I said I'd be there, and when a studio member did come in late in the afternoon, it was a welcome break.

While I didn't rush anything, I did alter some planned glaze work and opted for what I knew would work (and yes, in a few cases, what was recently mixed). The load went well, until as I neared the top I could tell there would be extra work that wouldn't make it into the kiln. Not exactly Sophie' Choice, but heartbreaking still when I was looking forward to seeing all this work done. But before I ceded to the space gods, I played a nice game of Tetris, shifting and squeezing and finding one more shelf, one more half shelf...a few more inches of top space. Those pots that have a less stringent deadline have been carefully packed into boxes for the next firing, and the others are about now reaching about 1800 degrees on their way to their own finish line, hopefully at a decent hour tonight, guided by the new kiln god on top of the door (if he lives through the firing, I'll snap a pic for the unload). 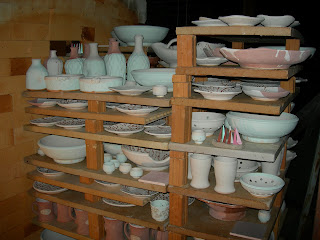 toward the end of loading...still squeezing more in...
The planned studio cleaning and re-organization, not to mention getting 2nd Saturday prep and PR going for this weekend's market ... well they're lagging a bit after cleaning the glaze studio and loading back all my glazing stuff into the car and back over to my studio. Time for a kiln check, then perhaps to the list for today ...
Posted by CGS at 12:54 PM