While we've had lots to do over the past two days, and in many ways it's gone by so fast, there's another part that has run in slow motion, and that's the timeline from when we finished loading the kiln Monday night to when we could finally open it earlier today. Even while bustling through wheel work and studio tours, always in the back of the mind is 'how long till we can open the kiln!?!?!?'.

Well Christmas in July has arrived, and we had some very, VERY nice results. Even better, Matt was able to see a distinct difference in the results he has had in past firings and those we had, using a different firing program and going to a slightly higher temperature.

Here are some results:

Matt's slab-built yunomi with added texture.
These were rubbed down with oxide washes before
glazes were applied. One will stay with me! 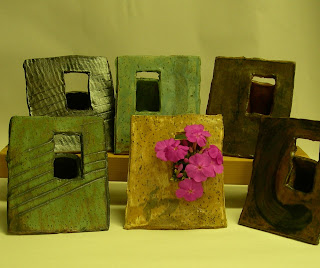 Matt's 'vase frames' - a fun design and beautiful in function!
Some had oxide wash, some underglaze brushwork
under the glaze. 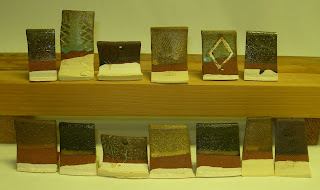 our 'super secret slip tests': lizella slip dipped on bisqued test tiles,
and then dipped in each of Matt's glazes and a couple of the house glazes
We were very pleased to see the glaze stayed on, and the textural and tone
results also give us more to play with going forward 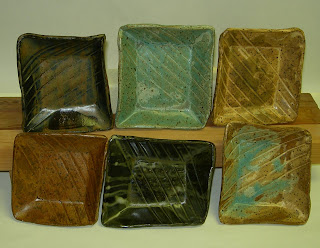 more slab plates (I can't wait to see future tests with his wheel work!),
he put texture lines in the wet pots, and the glazes made
some nice accents in those lines. 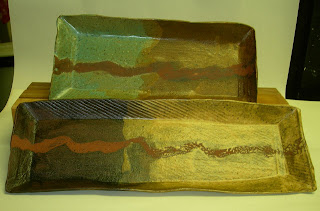 platter tests: these were lined with the lizella slip. Matt then
painted a line of wax resist up the middle before painting a
different glaze on each side. Again, the tone, color and texture that the
lizella slip brings will be the starting point for many more tests! 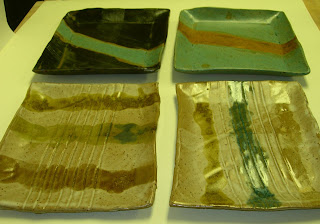 plate tests: Matt picked up a couple of new commercial
glaze colors to test, and these are some of the combos.
the bottom two are his commercial glazes accenting
one of my house glazes. The quick & dirty photos don't
show it well, but some of those combos, along with
slow cooling, produced some nice crystallization. 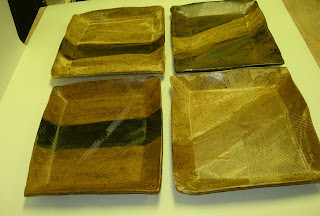 more plate tests, putting various combos of the commercial
glazes together. Again the photos don't do justice to the
way the glazes and combos are working with the texture
Matt put in the plates. 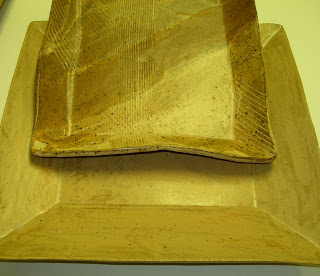 the bottom plate is one Matt fired in his studio, and
the top plate is the same clay body, with the same base glaze,
but fired to a higher temp and down fired. He was very
pleased to see the difference! 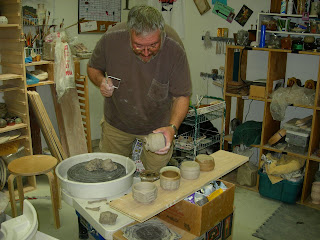 We did do some trimming on the yunomi we threw on Tuesday,
but the wet box did its job too well, and Matt left some to finish tomorrow.

Tomorrow is our last day, and we'll be pulling it all together, discussing materials and methods for mixing glazes, oxide washes and conducting line blend tests. We'll talk about equipment and take another look at our glaze results, and finish trimming the yunomi. We also have a bit of lizella clay that we'll be throwing for guinomi, or sake cups. Add to that a last shopping spree at Highwater, some local studio visits and of course ... lunch at Roots! I think I will succeed in my goal of sending them home well fed, in both body and mind!
Posted by CGS at 3:01 PM