Yo, tho I walk through the valley of old scraps, weird clay out of the box and wet slop,
I fear not, for I have a pugmill! 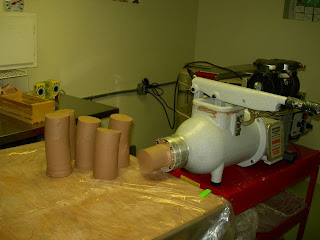 I fired it up today, and the crowd roared and the angels sang...and the dog barked, but that's because there are dogs on the roof across the parking lot and they seem to be having an ongoing conversation.
The pugger is good. I started out just to throw my butt off today, but bag one of clay proved to be just odd enough out of the box that I decided to detour into the pug world. I did two small batches, and I think I'm getting the hang of how it wants to be treated, although I may call the company in the morning just to make sure I've got all my settings good. I've got enough old dry, leather hard and wet slop to mix up to a just right consistency, and the first batch of 'Lori's Mystery Clay' is on the shelves drying. 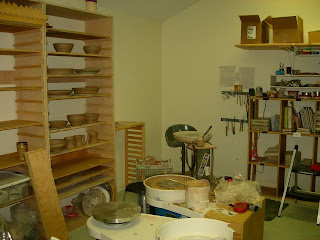 mystery clay drying on the shelves, and a glimpse of the new storage shelf overhead
I'm still finishing up orders and refills, but I'm thinking ahead to what I want to put together for the show in early September. One thing that sticks in my mind from the workshop last week is working in series. This isn't new, Becca has made that plea in every class I've taken with her, and it's something I know I want and need to do. Now that the last workshop is over for me as resident, I need to start making the transition away from playing with all these cool techniques and working in a more focused way with one or two until I decide if it's a keeper or not. The teaching will keep other things fresh, but my work has to come out of this big pile o' scraps at some point!

Testing out the mystery clay gave me a chance to work on some forms I want to do in series. Since I don't know how this will fire, I won't use it for any orders in process, but I did start a few new commissions with it, and I also started a few forms I want to do in series. If you look closely you can see some new mug forms. Certainly influenced by the workshop, but a shape I've been wanting to get back to.

That's it for tonight - back to the wheel. My wonderful roommate is giving me a spa treatment tomorrow, and I've had to promise to 'chill out' after I do it, which means no hands in clay, but at least I'll catch up on my books and get emails answered. So tonight will be later to get more things trimmed and more into the kiln for a firing. xoxo
Posted by CGS at 5:14 PM