You've heard me talk about my friend Karen, who is a textile artist, painter, art therapist ... well she's an artist and that will encompass these and her many other talents. 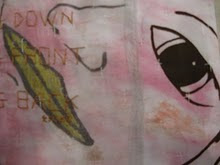 Big Fat Art Cloth blog
Her blog, Big Fat Art Cloth, which I have encouraged you to read and follow, has started a series of artist interviews, and she's ventured away from her own medium to pick l'il ol' me for her first subject. Questionable as that sounds, it was a very nice experience for me and I look forward to reading what other artists have to say in future interviews.
Interestingly for me, while I've received many lovely comments from friends and family about the interview, it seems one of the most interesting things mentioned was the fact that I appeared in a Freddie Mercury video. Anyone who has seen my work should not be surprised, the influence and effect are still resounding in my current body of work (and anyone who doesn't know I'm kidding...).
So here's the story, just so I can refer people to this post when I get asked again:
20-somethin' years ago, I visited my friend Anne in London, where she was getting one of her many degrees and teaching Australians how to play quarters with home-brewed beer (ok, so I helped on that). An opportunity came for local students to be a part of a video shoot at a West End theater, and she couldn't go but arranged for me to go. At the time, when a West End musical was a hit, the soundtrack was often covered by pop artists. For this show, "Time", Freddie Mercury was recording the title track, and shooting the video in the theater. At that time, I was working in theater so it was a huge thrill to get an on-stage look at such a production, and it was the 80's ... who didn't love Queen?! So there I was along with several dozen students from one of the local performing academies. We spent the day learning the lyrics, then got onstage and Freddie Mercury joined us for the shoot. When he arrived, we may have made even bigger news as a good portion of our chorus, perched on hastily assembled risers, started stomping and clapping the beat to "We Will Rock You", sending the techies and producers into a frenzy trying to stop the motion before we collapsed. But we all survived and lived to rock another day.
Another big bonus was a free ticket to the show after we ran over a couple of hours. The show never made it to the US as it was based on the existence of the Cold War, and before it could move across the pond, the Berlin Wall came down. The show was a lot of fun, and the highlight for me beyond seeing the stage effects in action was the projection of Sir Laurence Olivier's head on a sculpted form inside a giant planet that opened up for his appearance (yes, he was the Big Giant Head). It was a memorable experience all around.
For years it never occurred to me to look for the video, as I figured it was lost on some obscure collection only available in England. But now we know that if it's been filmed or taped, it's bound to be on YouTube! So here it is - I'm part of the blur in the back somewhere.
Posted by CGS at 7:45 PM